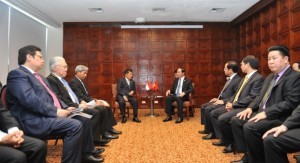 Before starting the series of APEC Economic Leaders Meeting, Vice President Jusuf Kalla had a bilateral meeting with the President of Socialist Republic of Vietnam Tran Dai Quang, in Casa Andian Hotel, Lima, Peru, on Friday (18/11).

The meeting discussed the action plan to enhance Vietnam-Indonesia strategic partnership for 2014-2018 period, the issues of trade, investment, defence, security, as well as politics.

At the beginning of the meeting, President Tran Dai Quang stated that the relationship between the two countries are much stronger. To support this strategic partnership, the President invited the President of Indonesia Joko Jokowi Widodo to visit Vietnam.

President Quang expected Vietnam-Indonesia cooperation to be more increased so the target of US$10 billion trade value by 2018 would be achieved.

President Quang also emphasized that both countries want to expand cooperations in drugs eradication, human trafficking, and also terrorism through Defence Policy Dialigue. Regarding the issue of terrorism, both countries are committed to exchanging information.

As part of Southeast Asia, the members of ASEAN must support each other in protecting the sovereignty of the country, Quang said.

President Quang supported cooperation to protect both countries Exclusive Economic Zone and strengthen it in a legal framework.

In the meantime, Vice President Jusuf Kalla expressed his condolences for the death of Vietnamese fishermen in Indonesian waters.We are handling this issue with the Embassy of Vietnam in Jakarta, the Vice President said.

Vice President Jusuf Kalla supports the cooperation commitment of both countries that has been done so far. However, the Vice President underlined that the standard minimum wages in regional area must get attention from the ASEAN member countries.

The Vice President noticed that as countries with a lot of human resources, Vietnam and Indonesia become the target of the investors to develop industries. The Vice President also emphasized that low wages competition offered by both countries can be benefitted by investors from big countries.We must share experiences with other countries in the region to make a system that determines regional standard minimum wages, the Vice President asserted.

At the meeting with the President of Vietnam, Vice President Jusuf Kalla was accompanied by Minister of Industry Airlangga Hartanto, Minister of Trade Enggartiasto Lukito, and Deputy Minister of Foreign Affairs A.M. Fachir.