Vice President: Police and KPK Should Not Check People Who Do Not Have a Criminal Offense 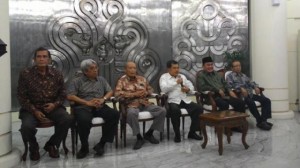 Vice President Jusuf Kalla together with the 9 Team give information to journalists, at the VP office, Jakarta, Tuesday (10/3)

Vice President (VP) Jusuf Kalla, Tuesday (10/3) afternoon, at the office of the Vice President, Jakarta, receive independent team, known as the 9 Team. The meeting discussed many issues facing this nation towards a better future, including criminalization issues.

In a joint press conference held after the meeting, Vice President Jusuf Kalla said, criminalization should not be made only to the Corruption Eradication Commission (KPK) and their supporters, but also to the entire community.

Furthermore, the VP confirms, if someone has a criminal or a criminal case and be investigated, it is not a criminalization, but the process of investigation.

Could be Resolved with Easy

Chairman of the Independent Team Buya Syafii who attended the meeting together with Asshiddiqie, Imam Prasodjo, Bambang Widodo Umar and Tumpak Hatorangan Panggabean said, that the meeting with VP going on for quite fierce but constructive.

Regarding the feuds between KPK and the Police, Syafii continued, actually could be solved easily, as long as the two institutions respect the legal process respectively.

Jimly also said that there is a trend weakening of KPK. However, the meeting with VP is not to find out who weaken KPK. “We must restore the power of KPK. It was a positive meeting”, Jimly said. (SetwapresRI/ES)