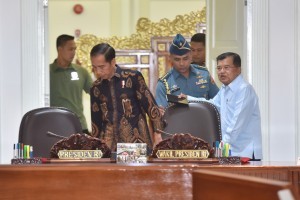 President Jokowi accompanied by Vice President Jusuf Kalla at a Limited Meeting on Rescue and Recovery Efforts of the Earthquake and Tsunami in Palu and Donggala, at the Presidential Office, Jakarta, Tuesday (2/10) (Photo: Jay/Public Relations Division)

On the other side of his introduction at a Limited Meeting on Rescue and Recovery Efforts at the Presidential Office, Jakarta, Tuesday (2/10), President Joko Jokowi Widodo confirmed that Coordinating Minister for Political, Legal, and Security Affairs Wiranto has coordinated the post-quake efforts  in Palu, Donggala, Sigi, and Parigi Moutong, Central Sulawesi province.

“The coordination is directly led by the Vice President,” the President said.

Previously, the President put emphasis on four aspects that becomet he Governments top priority in the post-quake handling in Central Sulawesi province, namely evacuation efforts, search and rescue of victims, matters relating to medical help and refugee handling, and infrastructure.

On that occasion, the President has also given the green light to accept foreign aid in the handling of post-quake and tsunami in Central Sulawesi and stressed that the aid would be tailored to peoples need.

“I have asked Coordinating Minister Wiranto to deliver what the residents need,” the President said.

The President admitted that some leaders have contacted him such as King Salman, Turkish President, and Australian Prime Minister to offer aid.

“I think,we tell them what we need on the ground immediately,” the President.

Some urgent needs are emergency tents, logistics, and medicines, the President concluded. (MAY/RSF/EN/JAY/OJI/ES)(MUR/EP/YM/Naster).