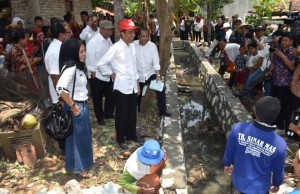 The President expressed his hope for an improvement of the economy of villages in Indonesia. According to him, the Government has allocated fund by Rp 20.7 trillion for 74,754 villages all over Indonesia.

I want the economy of villages to be improved. In 2015, the village fund is allocated at Rp 20.7 trillion. Please, use the fund soon, the President said in his twitter account @jokowi posted by him a few hours ago.

Meanwhile, in his facebook fan page, President Widodo stated that the fund is really important to drive the economy of villages, provide job opportunities in the village, and accelerate the development of rural areas.

I reminded that the village fund cannot be saved in Bank for a long time. The fund must be used for infrastructure construction and labor intensive program, the President stated.

Similar to the insistence of President Widodo, Minister of Villages, Underdeveloped Regions and Transmigration Marwan Jafar insisted Regents/Mayors in entire Indonesia to distribute the village fund immediately. No more funds are saved in the local Government account.

I have reminded all Heads of Regions many times to distribute the village fund soon. If they are slow in distribution, they will be subject to sanction for postponing General Allocation Fund or Local Profit-Sharing Fund, Marwan stated, in Jakarta, on Sunday (27/9).

Marwan reminded that the Government has issued a Joint Ministerial Decree (SKB Tiga Menteri), namely Minister of Home Affairs; Minister of Finance; and Minister of Villages, Underdeveloped Regions and Transmigration that simplifies an administration process for Local Government to accelerate the distribution of village fund. For instance, fund allocation program by the village Government as the fund disbursement is made easier.

To be recorded, nowadays, the village fund is our mainstay to drive the economy of village, build the village infrastructure and create many job opportunities in the village to solve the issue of unemployment and poverty and to boost the purchasing power of the villagers, Marwan noted.

Furthermore, Marwan asked the Heads of Region to give a quick response for the report of Central Statistics Agency (BPS) last time regarding an increase of the number of underprivileged people in the village in which the percentage is higher than that in the city.

There must be a quick response from the Heads of Region by immediately distributing the village fund to be directly used for the construction of village infrastructure such as road, irrigation, sanitation, etc, Marwan stated.

Data from Ministry of Finance of the Republic of Indonesia until this month shows that a total of Rp 16.57 trillion or 80% out of a total budget of Rp 20.7 trillion of the village fund allocated in the 2015 State Budget has been distributed to the Government of Regency/District in entire Indonesia. (SLN/UN/ES) (JS/MMB/YM/Naster)