Village Fund Must Be Circulated Within Village, President Jokowi Says 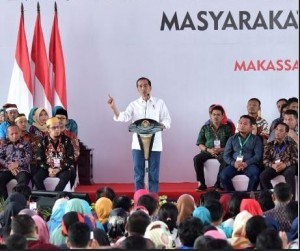 Although the use of the Village Funds has shown outstanding outcomes, President Joko Jokowi Widodo said he would continue evaluating its use and called on village heads and village fund facilitators to use them based on villages priorities and needs.

I order you to use the funds wisely. Use them according to village goals and needs, President Jokowi said in a directive at the 2018 Evaluation of Development Policy and Empowerment of Village Community, in Makassar, South Sulawesi, on Saturday (22/12).

Even if the price of goods in village is higher, it shouldnt be a problem as long as the difference is only Rp5,000 since the money will be spent for the village as well, he added.

In addition, the Head of State also reminded the people to ensure that projects developed by using Village Funds are really needed by people in the villages. The people must deliberate first before using Village Funds, so they can be spent on one certain goal and can bring benefits for the villages, President Jokowi said, citing an example of village road constructed by using the funds.

For the upcoming years, President Jokowi expressed hopes that the use of Village Funds can meet the target to empower the economy in rural areas and bring innovation in the villages.

The President added that it is time for everyone to begin to reap the rewards of development investments funded by the previous Village Funds. We can turn villages that have a spring as tourist village. For example a spring located in Ponggok Village, Central Java was turned into water recreation site. Can you guess the villages annual income? Rp14 billion, the President firmly said.

President Jokowi also encouraged village heads to start evaluating potential industrial needs. In this case, he added, the village can be a producer of raw materials needed by industries in the country.

“The Governor has told me that production volume of cocoa is still low, not only in South Sulawesi but nationwide. There are many chocolate factories, but there are less cocoa farmers, forcing us to import cocoa. We cannot let this happen. We can grow cocoa here. Why should we import it? ” the Head of State said.

According to the President, villages must know market demands, factory demands, and industry demands. We must understand it so that Village Funds can be used for productive sector that are beneficial for the village communities. President Jokowi concluded. (BPMI Setpres/ES)