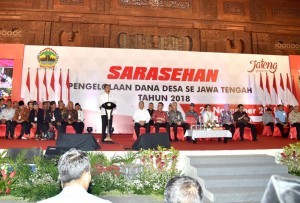 Village development is one of the main focuses of the Government over the past four years, President Joko Jokowi Widodo has said.

I believe by building villages, we build Indonesia, President Jokowi said at the 2018 Village Fund Management Workshop in Central Java at the Development and Promotion Center Building (PRPP), Semarang, Thursday (22/11).

According to the President, there are approximately 74 thousand villages throughout Indonesia and since 2015, the amount of funds disbursed by the Government always increased every year.

President Jokowi also expressed hope that village funds would only circulate in the village and be utilized for maximum village developments.

Without the circulation of money, it is impossible to improve the villages welfare, he said.

In 2019, the President also expressed hope that village funds  will not only be used for village infrastructure development, but also to support relating to human capital development, such as stunting cases in children which  need more attention.

The poor nutrition that causes stunting, he said, is feared to affect the quality of Indonesia’s human capital in the future.

In 2014, our stunting rate was very high, 37 percent. Now it’s already declined but still around 30 percent, President Jokowi said, adding that the Government will continue to reduce it up to 20 percent.

Use of village funds for this purpose has been regulated in Regulation of Ministry of Villages, Disadvantaged Regions and Transmigration Number 19 of 2017 which states that village funds can be used to fulfill public health and education needs. In addition, village funds are also required to be used in the future to fulfill the need for education for rural children if deemed necessary.

On that occasion, the President emphasized that the development of human capital through education is a long-term investment that can be enjoyed by future generations.

President Jokowi also maintained that all children in the villages can go to school and if there are no funds available, the residents can ask for Smart Indonesia Card (KIP). If it is not possible, the President ordered them to use the village funds to help the childrens education. (BPMI/EN)