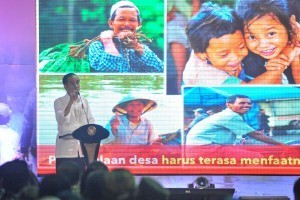 President Joko Jokowi Widodo said that other countries have started to observe the village funds program.

The World Bank has conveyed that some countries are planning to imitate the village funds program, the President said when meeting Village Facilitators in Froggy Field, Foresta Business District, Tangerang, Banten, Sunday (4/11).

According to President Jokowi, the village funds are used for infrastructure, as well as to empower rural economy and village innovations. Village funds are not only for infrastructure but also for economic empowerment and village innovation, said the President, adding that it also will be used to increase the quality of Early Childhood Education (PAUD) so that children can get healthy nutrition and good education.

President Jokowi went on say that people living in villages must be able to compete with those living in big cities in terms of skill and ability.

Furthermore, for economic empowerment, President Jokowi suggested to collaborate with factories, industries and companies so that all goods produced by villages can be absorbed. However, the President also reminded to be careful when determining the markets and calculating the market price carefully.

For this reason, it is the duty of the village facilitators to connect farmers and buyers, the President said, while adding that villages also need to promote their tourism to increase village income.

Regarding innovations, President Jokowi continued, Banten has a lot of potential to develop, thus Village Heads and the officials must be dynamic to create new innovations, the President concluded. (JAY / EN)