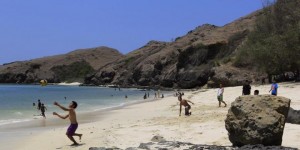 President Jokowi says purposely visited KEK Mandalika, because even though the land has been acquired since 1987 ago, but until now still stalled. “It’s been since 1987 were released but stopped,” he said.

According to the President, the government has injected funds amounting to Rp 250 billion to Indonesia Tourism, Development Corporation (ITDC) as the manager of KEK Mandalika. However, he promised next year would provide additional funds of Rp 1.8 trillion to support the development of basic infrastructure and attract the investors to enter.

During the visit, President Jokowi had a look around the Mandalika tourist areas, and admires its beauty.

President Jokowi asserted, obviously, after completion of basic infrastructure development, in parallel with the regional support infrastructure will requires an investment of up to Rp 36 trillion.

The President said, the government did not hesitate to run the big projects in West Nusa Tenggara because already done studies that show the area is most suitable for tourism development.

The President added that the development of tourist areas Mandalika could absorb 8,000 of direct labor and could bring many benefits indirectly.

“Since 1987 is not retreat, we are injecting Rp 250 billion this year, next year to Rp 1.8 trillion. In August there will be a ground breaking hotel, that means it starts to move,” Jokowi said.

Regarding the investors who will work on the project, President Jokowi says that already exist of investors who starting to get interested, among other from China.