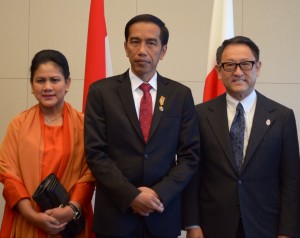 President Jokowi and First Lady Iriana were welcomed by President Toyota, Akio Toyoda, while visiting the company, in Nagoya, Japan, on Wednesday (24/3)

Arrived in Nagoya by Fast Train (Shinkansen) from Tokyo, Japan, President Jokowi, and First Lady Iriana directly toward the office the Company of Toyota on Wednesday (25/3) this noon.

“I met with President of Toyota, Mr. Akio Toyoda, and I ask that Indonesia can be used as a special product service for export,” President Jokowi said.

According to the President, the Toyota has agreed that the export will be increase three times from the present, both the components and the car, or at least equal to Thailand.

“Now the export of Thailand seven hundred thousand, while Indonesia only two hundred thousand, the commitment like that just now. But he (President of Toyota) also requested that assisted by work visa, transportation of goods from the factory to the port, the third problem is related to the port,” Jokowi said.

President continued, the Toyota side has said that will invest Rp 20 trillion. “If this entry to Indonesia, the others will follow because it builds the trust,” he said.

On the occasion, President and the entourage conducted a review to the Toyota Assembly Line Devision, and meet 36 workers from Toyota Indonesia who were undergoing training there.

The activity ended the whole series of state visits and working visits President Jokowi during in Japan. Furthermore, the President which accompanied by First Lady Iriana and the  entourage will continue the visit to Beijing, People’s Republic of China, through the Chubu Centrair International Airport Nagoya, Japan.  (Humas Setkab/ES)