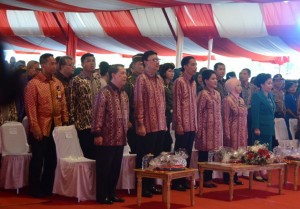 President Jokowi accompanied by First Lady Iriana attend the anniversary of the 12th BBGRM, in Manado, North Sulawesi, on Thursday (28/5)

President Joko Widodo (Jokowi) accompanied by the First Lady Hj. Iriana Jokowi since Wednesday (27/5) evening has been in Manado, North Sulawesi, for a number of agendas in Manado and number of regions in the province.

Starting with a welcome dance treats presented by Nyong Noni Bolang Mongondow, the President and the First Lady seemed so excited to see the performances of the dancers.

In his speech President Jokowi began by reminding the public, that 4 (four) days left on June 1, we will be commemorating the birth of Pancasila.

“Today I want to remind all, what was said by the president, Father of the Nation and the originator of Pancasila. That from five principles of Pancasila we can gist is on Mutual Cooperation, “President Jokowi said.

“Mutual cooperation is not only the soul of the nation but also social capital in facing the future,” President Jokowi said.

According to President Jokowi, mutual assistance must be interpreted not just a slogan, or limited just words or jargon, but should actualized in daily life, in everyday work, embodied in the life of society.

Recognized by the Head of State, it is not easy to run a spirit of mutual cooperation in the midst of life tend to be individualistic and competitive, and there are many of us who work alone than together. “This is what I need to remind today,” Jokowi said.

On that occasion, President Jokowi expressed gratitude and appreciation to the PKK, both central and local levels on the achievement that has been done.

Looking ahead, he said, he wanted to see the PKK to grow as a force and a role again in the fields of education, health, public welfare program until the bottom level and the grassroots.