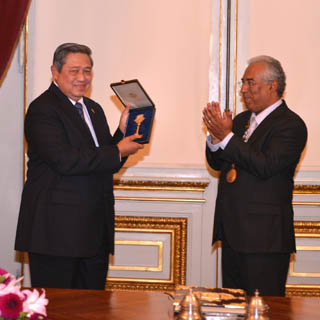 In the end of the series of his three-day visit to Portugal, President Susilo Bambang Yudhoyono (SBY), who was accompanied by First Lady Madam Ani Yudhoyono, received the golden key to Lisbon City from Mayor Antonio Costa, in the Lisbon City Hall, Portugal, on Friday afternoon local time or Friday evening west Indonesia time.

I hope that in the future, Mr. President can promote both cities cultures and cooperation, Mayor Costa said. He also said that he was proud that Lisbon became one of the cities which President SBY visited in the end of his tenure as the President of the Republic of Indonesia.
Meanwhile, in his remarks, President SBY accepted the golden key as the symbol of increasing cooperation between Indonesia and Portugal. I accept this golden key to Lisbon City as the symbol of our readiness to open more cooperation between both countries and between both cities, he said.

President SBY himself mentioned Lisbon as one of the most important cities in which the world exploration started and the city which pioneered major expeditions and contacts between Europe and Asia.

Those facts give us strong reason to strengthen the relation of both countries citizens. These issues became the topic of my discussion with Portuguese President and Prime Minister, President SBY explained.

In my opinion, both Portugal and Indonesia can do more to help East Timor develop itself continually, both in its democratic processes and in its economic development, President SBY said and then mentioned that the three countries cooperation will benefit their nations and their peoples respectively.

President SBY stated that in the last 15 years, both countries bilateral cooperation has been continually growing stronger, especially since President Silva visited Indonesia 2 years ago after both countries relations got into a state of stagnation due to problems related to East Timor.

Both countries have found the new relations and spirit to strengthen their cooperation again, President SBY explained.
He mentioned that both countries agree to increase cooperation in economic affairs, investment, energy, and infrastructure development. Both countries see the potential for increasing cooperation in other sectors, especially in fisheries and maritime affairs.

Previously, on Friday morning (19/9) at 10.00 AM local time, President SBY together with First Lady Madam Ani Yudhoyono visited Jeronimos Monastery, a historical building in Portugal which was built in 1502 and designated by UNESCO in 1983 as one of the World Heritage Sites.

Jeronimos Monastery is a building which houses the tomb of Luis Vaz de Camoes, a Portuguese renowned poet who was then recognized as Portugals national hero. Born in 1524, Camoes once set foot in Malacca. He wrote the epic of the voyage undertaken by Vasco da Gama who traveled around the world and once set foot in Nusantara archipelago. Camoes most renowned masterpiece is Os Lusidas or The Lusiads. Camoes died in 1580.