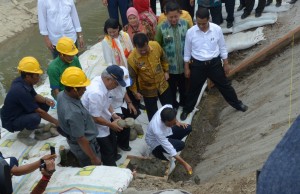 President Jokowi accompanied by First Lady Iriana, and Governor of South Sulawesi for the initiation of storage reservoir construction in Sidrap, (5/11)

President Jokowi is welcomed by Minister of Agriculture Amran Sulaiman, Governor of South Sulawesi Syahrul Yasin Limpo and Deputy Governor Agus Arifin Numan, and other officials. After 30 minutes of break, President and delegations continue the trip to Sidenreng Rappang (Sidrap) with H-3222 helicopter to survey the irrigation and conduct a groundbreaking of Boyya Reservoir construction, at Betao Riawa village, Pitu Riawa district.

Regent M. Rusdi Masse and the people of Sidrap are enthusiast to welcome the President and First Lady Iriana, by waiting all the way to the Boyya Reservoir. They call Presidents name, that President Jokowi smiles answering the call.

In a large banner placed near the location, says the local government and people appeal to President Jokowi to realize the Boyya Reservoir construction which has capacity of 65  85 million m3, at Betao Riawa village, in Pitu Riawa district. The benefit from it enlarges irrigation by around 5000 Ha, serves as flood control for Tanru Tedong city, normalizes the water supply for Bulucenrana irrigation about 4.320 Ha, and Bila irrigation about 4.055 Ha, serves as water supply for Sidrap, Pare-Pare and Enrekang, and as Electric resources, and develops the aquaculture.

At the occasion, President Jokowi says the target of 2015 that Indonesia would have food self-sufficiency. Government also targets to stop independency in several commodities such as soybean and wheat to meet the needs of national food consumption, said Jokowi.

According President, 52 percent of irrigation tunnels all over Indonesia currently are in bad condition and urgently need to be repaired. He promises in five years of his leadership, would completes 30 water reservoirs which could also supply water for irrigations needed by agriculture. Next year, says Jokowi, government would starts five years development program of water reservoir at five locations in Indonesia such as, Aceh, East Nusa Tenggara, South Sulawesi and Kudus. After conduct groundbreaking, President Jokowi walks around the irrigation and shakes hand with locals there. Jokowi smiles to the people who call his name.

Next, President Jokowi and delegations continue the trip to Pinrang to harvest in Barangpalie village, Lanrisang district. President Jokowi is the fourth President who visits Pinrang, after President Bung Karno, Soeharto, and Megawati Soekarnoputri. (IRA/Humas Setkab/ES)