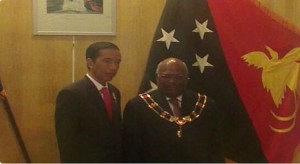 “This is a very impressive achievement,” President Jokowi said when dinner together Prime Minister of PNG Peter O’Neill in parliament, Port Moresby, on Monday (11/5).

All that has been achieved, Jokowi said, is inseparable from the leadership of Peter O’Neill in advancing the country. “I also impressed with PNG’s economic growth that is very high,” President Jokowi added.

By the age of friendship between Indonesia and PNG which had entered 40 years, President optimistic the diplomatic relations that have been established so far can provide important meaning to the development of people prosperity in the two countries.

“My visit this time will re-affirm the commitment. I am optimistic that the future of bilateral relations between Indonesia and PNG will continue to increase,” Jokowi said.

President Jokowi also considered that PNG is a very important neighbor, in which the two countries not only have to live together side by side, but also share the island and shared expectations. The similarity of cultures, traditions and values have made Indonesia-PNG mutual friends.

“As a brother, of course PNG will help Indonesia build a friendship with the countries of Melanesia in the region,” President Jokowi said.

While the PNG Prime Minister Peter O’Neill said in his speech, after the bilateral meeting, the representatives of the ministries of both countries will sign the MOU regarding the joint development of oil and gas resources, and the prevention and combating of crime between the countries.

“This MOU reflects the more comprehensive, relevant, and the modern tangle of bilateral between the two countries,” Prime Minister Peter O’Neil said.

In welcoming ceremony also present Minister of Foreign Affairs Retno Marsudi, and Minister of Energy and Mineral Resources Sudirman Said and the Head of the State Intelligence Agency (BIN) Marciano Norman who had arrived earlier.

Previously, President Jokowi expressed that the state visit to Papua New Guinea will discuss several issues related with cooperation between the two countries.

“A lot of things will be discussed, the details later when we got there,” President Jokowi said, at the press conference in Biak, West Papua, on Monday (11/5. (*/WID/ES)