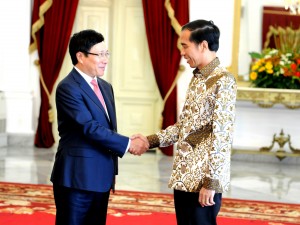 Minister of Foreign Affairs Retno LP Marsudi who accompanied President Jokowi together with Minister of State Secretary Pratikno said that the meeting discussed several things, among them related to the celebration of 60 years of diplomatic relations between the two countries.

“Vietnam-Indonesia also has a strategic partnership since 2013,” said Retno told reporters after meeting between Deputy Prime Minister of Vietnam with President Jokowi.

Retno said that economic cooperation between the two countries is also very prominent because of trade between Indonesia and Vietnam in 2013 ago, has reached 5 billion US dollars.

According to the Minister of Foreign Affairs, Indonesia’s investment in Vietnam is quite a lot, and Indonesia is the 27th largest investor in Vietnam.

“Earlier at the meeting of Prime Minister of Vietnam with President Jokowi, Indonesia expressed gratitude for the cooperation given by the Vietnamese government in order to help the Indonesian investors who invest in Vietnam,” Retno said.