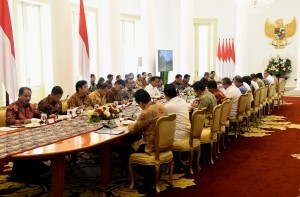 After focusing on infrastructure development in the past 4 years, the Government will now focus on human resources development, President Joko Jokowi Widodo has said.

We must be able to make 260 million Indonesians a great power of the country to boost economic growth and achieve prosperity, the President said during a limited cabinet meeting on human resources development at Bogor Palace, West Java, Wednesday (21/11).

According to President Jokowi, there are two keys to develop human resources, namely improving education system and improving skills of Indonesian workers.

I have acknowledged reforms we carried out at vocational high schools in both the curriculum and competency management, especially for teachers. However, I would like to see a bigger reform starting next year, the President said.

Another key to develop human resources, the President added, is by improving workers skills through vocational training and certification programs, which are expected to be carried out in a massive scale starting next year.