VP: Everyone Learns About Passion, Hard Work, and Brotherhood from Para Games 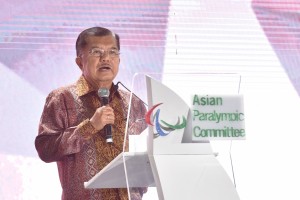 This week has been an excitement for our nation and for Asia. A historical week that shall always be remembered by all Indonesians, said Vice President Jusuf Kalla in his speech at the closing ceremony of the 2018 Asian Para Games at Gelora Bung Karno, Saturday (13/10).

This past week, Vice President added, everyone has given inspiration and passion to the athletes to overcome their limits and came out as champions. The 2018 Asian Para Games, according to the Vice President, is more than a sporting event, more than a competition, and even more than just winning medals for our country, but an event to inflame spirit for equality and humanity.

Embrace diversity, eliminate stigma and prejudice. This is the most important moment in the history of Asian Nations, Vice President Jusuf Kalla said.

The Vice President also congratulated Minister of Youth and Sports Imam Nahrawi who had coached the athletes, therefore resulting glorious achievements.  On behalf of the Government, I would like to congratulate and give my recognition to all official members of the 2018 Indonesian Asian Para Games Organizing Committee (INAPGOC) led by Mr. Raja Sapta Oktohari that have worked hard with full dedication and sincerity in preparing and managing the 2018 Asian Para Games, Vice President Jusuf Kalla added.

The Vice President also congratulated that Indonesian Contingent have exceeded the goals in earning 16 gold medals, but has exceeded more.

For the record, Indonesian athletes managed to earn in total of 135 medals, with the collection of 37 gold medals, 47 silver medals, and 51 bronze medals, which also put Indonesia in the fifth place on the medal tally, exceeding the achievement from the previous Asian Para Games.

Vice President Jusuf Kalla also applauded his Governor of Jakarta, 8,000 volunteers, journalists, security officials, guests, audiences, and athletes. This past week all of you have shown that you are stronger, better, and more capable than what was estimated, Kalla said.

Although the athletes have special needs and some lack deficiency, he added, they do not lack passion, achievement, and glory and with handwork and extraordinary achievement, they can change the perceptions of disabled. He also congratulated all athletes whether they earn medals or not. Thank you for giving us a wonderful competition. You are all champions, not just in the arena but champions to humanity, Kalla said.

Finally I would like to say congratulation and thank you to all Indonesian citizens, he said, adding that the success of this event is based on the support from all the people of Indonesia.

This shows that our nation appreciates equality and we are united to achieve goodness and improvement, he said at his final speech, Vice President Jusuf Kalla conveyed farewell to all athletes returning back to their countries.

I hope that when you return to your country please bring your memory of Indonesia to your brothers and sisters. Send my regards to your families. Remember Indonesia will miss all of you, he said.

Vice President Jusuf Kalla also urged that this years Asian Para Games as a Spirit for Asian Nation. Let us make this years Asian Para Games and the years to come as a spirit and energy to unite Asian Nations towards improvement, prosperity, and peace in diversity, Vice President Jusuf Kalla concluded. (UN/Oji/EN)(HYP/EP/Naster)