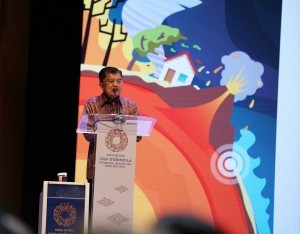 The Indonesian Government invited all participants of the 2018 Annual Meetings of the International Monetary Fund-World Bank Group to share ideas and find the right solutions on the issues of disaster risk financing and insurance.

It is the right moment because a disaster just hit Indonesia several weeks ago, Kalla said when delivering his keynote speech at High Level Dialogue on Disaster Risk Financing and Insurance in the Bali International Convention Center, Nusa Dua, Bali, Wednesday (10/10). Vice President Kalla further said that the Annual Meetings is a good momentum for Indonesia. This event is expected to give solutions on how to maintain fiscal security and do not mainly depend on international cooperation.

In the meantime, Minister of Finance Sri Mulyani Indrawati admitted that disaster management in Indonesia still depends on the State Budget and Regional Budget, and even the Government has to reallocate the budget.

We need to identify all risks of natural disasters and think of the best fiscal mechanisms and financial instruments to support the most effective and fastest rehabilitation, Sri Mulyani said, adding that a long-term strategy is needed to build resiliency to natural disasters, particularly from fiscal side.

According to the Minister, when a disaster hit, the focus of the Government is to evacuate the victims and carry out recovery and reconstruction efforts. But we rarely discuss the matter of risk transfer, including financing. Disaster management then is not synergized and integrated, Sri Mulyani said.

Therefore, the Minister continued, the Government opens up to gain experiences from other countries on disaster risk financing, such as the Philippines that has insured their local government buildings and Morocco that has insured their Micro, Small, and Medium Enterprises and low-income residents’ houses. For that reason, in the upcoming 2019 fiscal year, according to Sri Mulyani, all government buildings will be covered by insurance.

During 2004-2013, Indonesia suffered a loss of Rp126.7 trillion due to disasters and over the last 12 years, the Government provides approximately Rp3.1 trillion for disaster reserve funds, the Minister said.

This financing gap is one of the reasons Indonesia is exposed to fiscal risks due to natural disasters, Sri Mulyani said and gave an example of tsunami and earthquake that hit Aceh province in 2014. At that time, the Government had spent Rp51.4 trillion for recovery process.

Therefore, according to the Minister, the Government is now preparing a roadmap on short and long term plans regarding disaster risk financing and insurance.

In addition to sharing about disaster financing, for example insurance instruments that can be immediately disbursed, Indonesia also wants to learn from other countries to handle disaster risk financing. So far, the financing only focuses on emergency, recovery, and reconstruction efforts and has not touched the aspect of risk transfer.

The event which was proposed by Indonesia was also attended by the President of the World Bank, Minister of Public Works and Public Housing Basuki Hadimuljono, and two ministers from Japan and the Philippines and a number of participants of the Annual Meetings. (Humas Kemenkeu/ES) (GWH/MMB/Naster)