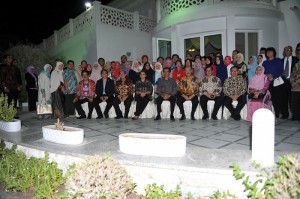 President Jokowi and his accompanying ministers were posing for a group picture with Indonesian Diaspora at the Wisma Duta of Indonesian Embassy in Doha, Qatar, on Monday evening (14/9)

President Joko Widodo (Jokowi) denied the opinion of some parties on the cancellation of the plan of Jakarta-Bandung high-speed train project. The President stressed that there was no cancellation, but he just wanted that the project was not constructed by using the State Budget (APBN).

Im still waiting for the calculation. If the calculation is reasonable, go ahead with the project. So, it is not cancelled. Who said that it was cancelled?, said President Jokowi when giving a speech before Indonesian Diaspora at Wisma Duta in Doha, Qatar, on Monday (14/9) evening.

Previously, when answering questions from the press on the sidelines of his visit to the Sub-District (kelurahan) of Rawa Badak Selatan, District (kecamatan) Koja, North Jakarta, on Thursday (3/9), President Jokowi stated his decision that the construction of high-speed train connecting Jakarta-Bandung would not use the APBN. The construction would be handled by BUMN.

The high-speed train will not use the APBN. BUMN will do the Business to Business (B to B) matters. I just reminded that the plan should be estimated again, said the President.

President Jokowi admitted that Indonesia needs to develop its trains. However, the Government does not want to give more burden to the budget, therefore, he chose to conduct a business-to-business approach.

We dont want to give burden to APBN. So, I have decided to let BUMN do the B to B, its business, President Jokowi emphasized.

According to the President, there are 2 (two) options for Jakarta-Bandung high-speed train, which are the train with the speed of 350 km/hour and the one with the speed of 250 km/hour. The Government have not got the concrete estimation for both options.

The President reminded that from the economic calculation, the high-speed train construction project would need the amount of investment of Rp 70 trillion  80 trillion. This calculation is very clear. However, the project is also a political decision, therefore, the long-term socio-economic side should also be considered.

Just because the investors have the money and technology, it doesnt mean that they can control us. No, they wont. We should be like this. We shouldnt easily follow what they want and be controlled by them, emphasized President Jokowi.