War on Drugs Should be Done Seriously 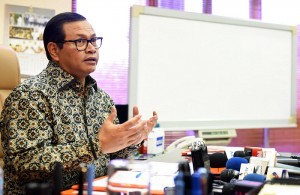 Cabinet Secretary responds to reporters questions at his working office, on Friday (26/2)

The war on drugs should not be half-hearted, Cabinet Secretary Pramono Anung said to reporters at his office on Friday (26/2) afternoon.

Therefore, according to Pramono, they can start the operation at the detention center (Lapas) whenever they want, without any procedures that would leak the plan and it has been agreed in a limited meeting yesterday.

Meanwhile, Pramono also said that the Government has overseen, reviewed, and stipulated matters related to Islamic State of Iraq and Syria (ISIS) and terrorism as the concern of Government at the Polri, National Counterterrorism Agency (BNPT), and Ministry of Law and Human Rights.

Indonesia has became the global model as the largest muslim population country, and third largest democratic country in the world. Therefore, Indonesia can also address the Thamrin attack in a short time and that make us a role model, Pramono said.

On the last ASEAN-US Summit, Pramono added, President Joko Widodo has been provided with many opportunities to deliver this matter.

The President will be invited to several countries in April and May to deliver the same points, Pramono added.

Regarding videos posted by ISIS, Pramono said that it will be followed-up by the Government.

Asked whether the ratification of the Law on Terrorism and De-radicalism will be conducted or not, Pramono asserted that the Government still runs after terrorist networks in Indonesia.

It is reflected when we can analyze the terrorists in the Thamrin terror attack into the detention center, Pramono added.

Regarding the previous law on Terrorism, Pramono said that the Government can not impose any sanction.

The BNPT can only nurture them, but they can not impose any sanctions to the convict, for example when a person conducts war drills by using wood material. We can not do anything, Pramono said. (DID/ES)(RAS/EP/YM/Naster)