We Can Learn Life Lessons from Choir, President Jokowi Says 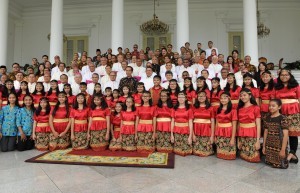 President Jokowi takes picture with the Committee and the Winner of the 2018 Church Choir Competition (Pesparani) at the Bogor Palace, West Java, (12/11). Photo by: Rahmat/PR.

After receiving the participants of Indonesia Millennial Movement Congress, President Joko Jokowi Widodo received the Committee and the Winner of the 2018 Church Choir Competition (Pesparani) at the Bogor Palace, West Java, Monday (12/11).

In his remarks, President Jokowi congratulated the winners and said that the most important thing in the competition is to celebrate togetherness, brotherhood, and unity.

“From a choir, we can learn a lot about mutual understanding, respecting each other, and building tolerance. Those values are what Indonesia needs today,” the President said.

President Jokowi further said that in a choir, all types of voice like soprano, alto, tenor, and bass must be delivered in harmony and there is no way for one type of voice to be dominant.

“You have to limit your ego to get a unified, harmonious, and beautiful sound,” the President said.

On that occasion, President Jokowi also said that the message of harmony, brotherhood, and unity should always be spread to the public because sometimes some people forget that the nation is very diverse, with different religions, ethnic groups, regional languages, customs, and traditions.

The President went on to say that a common understanding is needed to maintain the nation’s greatest assets: unity, brotherhood, and harmony.

“Do not let intolerance, extremism, and fanaticism destroy our society,” President Jokowi concluded.

Also present during the event were, among others, Minister of Religious Affairs Lukman Hakim Saifuddin, Presidential Chief of Staff Moeldoko, and Chairman of the Creative Economy Agency (Bekraf) Triawan Munaf.