We Have to Build Transformation Agents, President Jokowi Says 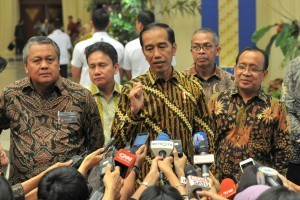 We are promoting vocational education and job skills training, President Jokowi said in his remarks at the opening of the 2018 Kompas100 CEO Forum at the Jakarta Convention Center, Jakarta, Tuesday (27/11).

The President also expressed hopes that in 2019 the Indonesian people can shift their habits from being consumptive to being productive.

Furthermore, President Jokowi said that it is necessary to strengthen the leaders capacity starting from in the village up to provincial levels as well as in the Central Government in order to face the 4.0 industrial revolution.

Together we must see this as a single entity, not as sectors, he said.

For this reason, the President continued, the Government and the people must create agents of transformation at all levels because the world is rapidly changes. The agents, he said, could be in private sectors, state-owned companies, as well as in government institutions.

This includes injecting skills so their skills quality can improve. I think our direction is there, the President said, adding that good leadership at the lowest level to the highest level will create agents of transformation and is expected to bring the wind of major changes. (FID/JAY/ES)