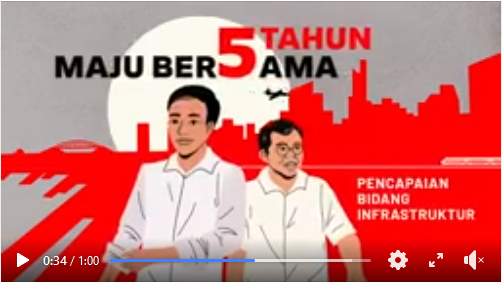 Ahead of the end of his first term as President of the Republic of Indonesia, President Joko “Jokowi” Widodo unveiled the success of infrastructure development in the past five years carried out by his administration.

The infrastructure development, according to the President, is spread across the country, connecting the areas of public production, small industries, Special Economic Zones, tourist destinations, rice fields, plantations, and fisheries ponds.

“It is for this reason we are confident to look forward to welcoming the next five years by continuing the development that has been underway, while building our human capital as the core of development,” said the President.

“We want the people to feel the presence of the state, to feel the success of development, and to feel proud to be citizens of the Republic of Indonesia,” said the President in the video with a tagline that reads “Advanced Indonesia”.

“Only with electricity networks covering the entire archipelago, ports and airports connecting islands, dams and irrigation irrigating rice fields, roads and bridges serving as a transport and logistics route can Indonesia become an advanced nation. There is no other way,” he said. (ES)