We Must Focus on Human Capital Development, President Jokowi Says 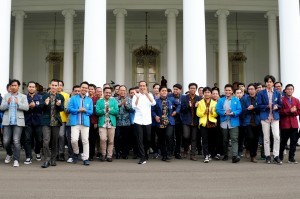 President Joko Jokowi Widodo reminded college students that Indonesia is a big country. Therefore, the President requested them not to only look at the provinces, regencies, and cities in Java, but also the other 17,000 islands.

We are different from other countries in preparing infrastructure, logistics, and human resources because our country is too broad, the President said when meeting with participants of the 2018 National College Student Conference at the Bogor Presidential Palace, West Java on Friday (7/12).

He reminded them that as a big country, the challenges and obstacles faced in managing Indonesia are also enormous, different from managing a country that is relatively homogeneous, small in size, and on one land.

However, the President said that based on McKinsey, Global Institute, the World Bank, and the National Development Planning Agency (Bappenas) calculations, in 2045 Indonesia will become a developed country and the worlds four strongest economies, with per capita income of approximately USD29,000 if we are consistent in development and keep working hard.

The President went on to say that productivity, high national discipline, good integrity, and willingness to work hard are prerequisites to materialize it.

Dont just depend on our natural resources. We must rely on the strength of human capital development, the President said.

For this reason, the Government will provide opportunities for Indonesian citizens to study abroad. The President admitted to have conveyed to Minister of Research, Technology and Higher Education that next year around 6,000 people will be sent to Taiwan.

I dont want that the number is only tens or hundreds. I want thousands. We must indeed spend funds, both for students and for those who have graduated, the President said.

On that occasion, President Jokowi also said that the Government would now make a balance of investment. The investment does not only come from the United States, Japan, China or South Korea, but also from countries in the Middle East, such as Qatar, Saudi Arabia and the United Arab Emirates.

Moreover, he stressed that Indonesia should not be dependent on one or two countries.

Accompanying the President on the occasion were Minister of Research, Technology and Higher Education M. Nasir and Minister of Social Affairs Agus Gumiwang Kartasasmita. (DND/ES)