We Must Have Courage to Make Decisions, President Jokowi Says 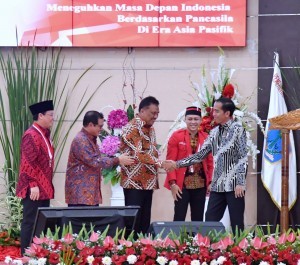 We Must Have Courage to Make Decisions, President Jokowi Says

President Joko Jokowi Widodo stressed the importance of the courage to make decisions just like what the Government has shown in issuing policies, such as declaring 1st of June as a national holiday to commemorate the birthday of Pancasila, stipulating Government Regulation in Lieu of Law Number (Perppu) Number 2 of 2017 on Mass Organizations, and negotiating with mining giant PT. Freeport Indonesia.

The President made the statement at the opening of the 20th Congress Trisakti of National Indonesian Student Movement (GMNI) at Graha Gubernuran, Manado, North Sulawesi, on Wednesday (15/11).

According to President Jokowi, when he decided to issue Government Regulation in Lieu of Law Number 2 of 2017, he instructed his ministers to prepare the draft.

In every decision, I am the one who is responsible. This is the authority given to me (to stipulate the Perppu), the President said, adding that if that Perppu has not been issued, anti-Pancasila civil mass organizations would still exist and the future of Indonesia will be at stake.

If we not do the right thing, we will continue to hesitate. Personally, I do not really understand about what we are scared of, the President said.

People were in doubt. (They are concerned) that it will later become polemic. I told them that this is the history that we must decide. So, do not hesitate, the President said.

According to the President, Pancasila is the fundamental principles of all Indonesians and this is the reason the President decided to declare 1 June as the Birth of Pancasila.

Pancasila is the state ideology. So, do not hesitate. And, after the Birth of Pancasila is stipulated, nothing happened, the President added.

Another decision by the President is the negotiation with mining giant PT Freeport Indonesia to divest 51 percent of its shares to the Indonesian Government.

We only held 9 percent shares for many years, and we stand idle. I do not know why we did that. Are we scared? Or dont we understand what are given to us? the President asked.

Therefore, the President instructed Minister of Finance Sri Mulyani Indrawati, Minister of Energy and Mineral Resources Ignasius Jonan, and Minister of State-owned Enterprises Rini Soemarno to negotiate and although, the negotiation has been under way for three years, it should be carried on.

Keep negotiating to get 51 percent. Do not give up, President Jokowi said.

The Government does not take any firm action against them. How could we let 7,000 foreign ships enter our territory without permit? the President added.

Consequently, the President, added, the countrys marine resources are dwindling and fishermen lose their livelihoods.

In a decade, the number of fishermen declined to 800,000 from 1.6 million because of dwindling fish stocks that make them change their occupation. We never pay enough attention to this matter. Who should protect our marine resources? Its us. Do not ask other countries to do that. Never, the President said.

Also on that occasion, President Jokowi raised the issue of infrastructure issues and stressed the importance of infrastructures development, which is not only to reduce gap in the country but also to make Indonesia able to compete with other countries.

Infrastructure is absolutely necessary if we want to compete with other countries. Indeed, there may be some people who now feel aggrieved, but once the infrastructures development is completed seaports, toll roads, airports, power plants will be fundamental assets to move the economy, as well as strengthen and improve our capacities to compete in this age of competition, the President firmly said.

We tend to do linear and monotonous routine, yet the global condition has rapidly changed . If we do not improve human resource development, we will be left behind. We will lose to with small countries in the region, the President added.

However, President Jokowi believes that Indonesia can compete with other countries by holding on to our power of unity and potential resources.