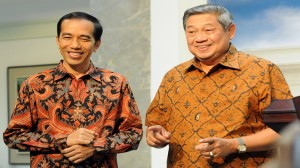 Today Indonesian Nation is entering a new page by having a new President who will serve during 2014-2019. Yes, the former Mayor of Solo and Governor of DKI Jakarta, Joko Widodo (Jokowi), who has been stipulated as the president-elect by Public Election Agency (KPU) and firmed through the winning in Constitutional Court, on Monday at 10.12 a.m. Western Indonesia Time will vow as President RI in front of the Plenary Meeting of Peoples Consultative Assembly of RI (MPR-RI).

Jokowi will be the seventh President RI to replace Susilo Bambang Yudhoyono who had served for two periods as President RI; which was in 2004-2009 and 2009-2014.

Following is the event arrangement of the President and Vice President Inauguration:

08.00    : Welcoming Reception for the Members and Invitees

10.23    : Submission of Inauguration Minutes by the Speaker of MPR

10.25    : Speaker of MPY continues to chair the plenary meeting

The inauguration of President Joko Widodo will be attended by around 17 state representatives and special envoys from partner countries. The Speaker of MPR-RI Zulkifli Hasan said that his party did not officially invite them.

Those 17 state guests who have confirmed about the attendances were:

After the inauguration in MPR-RI and the state banquet, President Joko Widodo accompanied by First Lady Iriana Joko Widodo headed to the Circle of Hotel Indonesia (HI) to be paraded to Presidential Palace.

Thus, starting from this day, Indonesia will enter the new history by having a new President and quoting from the cover of Time Magazine with the new hope.