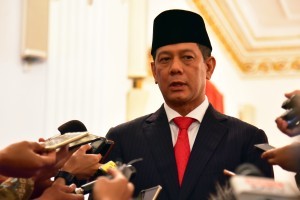 Newly inaugurated Head of the National Disaster Mitigation Agency (BNPB) Lt. Gen. Doni Monardo said that one of his top priorities after taking helm of the agency is to focus on the reconstruction efforts in areas affected by disasters, such as Lombok, Palu, Banten and Lampung, as well as Cisolok in South Sukabumi.

I will meet with all BNPB officials this afternoon and well take various steps to be implemented on the ground, Doni told reporters after his inauguration at the State Palace, Jakarta, Wednesday (9/1).

In addition, the BNPB will also draft a program to improve disaster mitigation efforts, he said.

Hopefully, it will reach village level even the community units (RW). We will also involve all stakeholders, Doni said.

Regarding the possible exclusion of disaster mitigation in school curriculum, Doni said he would monitor the development and the extent of the concept or learning program for students. According to him, disaster mitigation subject should not only be taught at secondary school level, but also at elementary school and kindergarten levels.

The subject can be about disaster-prone areas and potentials of major disasters, he said.

On that occasion, the new BNPB Head also stated that the results of a number of studies and research by several disaster experts revealed a number of megathrust quake potentials in several regions in Indonesia. The results, he said, must be disseminated to the public in appropriate ways so that those living in disaster-prone areas can prepare themselves in the face of disasters. (DND/RAH/ES)