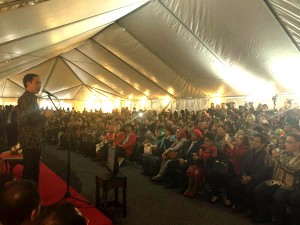 President Joko Widodo expressed his confidence that the decision of the Government to focus on infrastructure and food, as well as to control the price of fuel oil is right on track.

The beginning is hard, but in the long term I believe that this is the right way, President Joko Widodo said when meeting Indonesian diaspora and citizens in the US, at Wisma Tilden, Ambassador of Indonesias House, on Sunday (25/10) afternoon, local time.

At the beginning of the meeting, the President said that like other countries, Indonesia is currently facing economic slow down, unstable exchange rate, etc. Moreover, we must also overcome the problems of forest and land fire as well as haze disaster.

The President believes that Indonesia needs an economic fundamental transformation since previously we depended on consumption, and commodities as well as raw materials selling.

President Joko Widodo reminded that we have experienced three boomings that we forget to use. The first is oil booming in 1975. At that time, we should have prepared a good foundation so that our oil industry gets stronger.

Second, in 1980s, there was wood booming. We were also failed in making use the momentum. We had no woods and the forest was destroyed. We got nothing.

However, the President reminded, if we continue to focus on making use natural resources and forget to prepare the industry, investment, or industry downstreaming, we will be collapsed.

This is our big mistake. This is what we will do. We have done some of them and the results can be seen in the third year, the President said.

To support these efforts, the President added, the Government focused on two things. The first is infrastructure; and the second is food. Therefore, one month after the inauguration, President Joko Widodo admitted that he made a decision to divert the subsidy of fuel oil to these productive sectors.