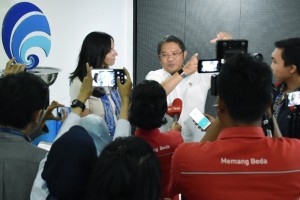 Feature to limit the ability to forward messages in WhatsApp that is effective on Tuesday (21/1) is aimed at preventing negative contents particularly hoaxes from going viral.

I personally have been discussing it with WhatsApp (representative) since September 2018. I had also discussed this issue with five world leaders. Thus, Indonesia is not the only country. We have had a discussion on limitation number of WhatsApp message share, Rudiantara said when meeting with Vice President for Public Policy and Communications of WhatsApp, Victoria Grand, at Ministry of Communication and Informatics, Jakarta, Monday (21/1).

After multiple discussions with WhatsApp since 2017, Ministry of Communication and Informatics is informed that WhatsApp will now limit users to forward a message only five times.

According to the Minister, WhatsApp shares similar concern in preventing the spread of hoaxes. Therefore, the company has been developing a feature to limit the spread of negative messages, and carried out beta test of the feature since two months ago.

I do apologize for not telling you because I am still unsure about the result and the past two months is used to carry out beta test. Alhamdulillah, praise be to Allah, the besta test is completed. I, personally, has not tried it yet since the effective date is Tuesday, Rudiantara firmly said.

Rudiantara explained that hoaxes are commonly spreaded through social media and messaging applications. The method is, first, post the news in Facebook, then spread it via WhatsApp. Afterwards, delete the Facebook account. This kind of virality concerns us, Rudiantara added.

However, he admitted that the feature cannot 100% guarantee that   there will be no more hoaxes going viral.This is our tasks to conduct risk mitigation, on how to suppress and minimize hoaxes, he added.

On the other hand, limitation is needed because there are cases that WhatsApp is being used to spread hoaxes and other negative contents. We limit messages that contained negative information and hoaxes, Rudiantara concluded.

Vice President for Public Policy and Communications of WhatsApp, Victoria Grand, stated that WhatsApp messaging application serves for one to one using. Based on researches and discussions with several world leaders, we have found that that five is the ideal number to avoid the spread of hoaxes, she said. (PR of Ministry of Communication and Informatics/ES)