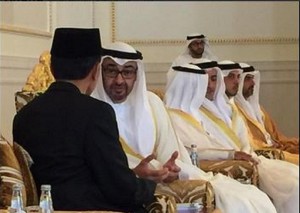 Behind such a short visit President Joko Widodo in the Middle East, 11 to 15 September 2015, evidently, was the impression of intimacy and warmth of the King and the Crown Prince, who welcomed the President.

Familiarity shown King of Saudi Arabia, Salman bin Abdulaziz Al Saud for instance, in addition to entertaining President and his entourage to stay in the palace of King Faisal in Jeddah, he was also pleased to invite President to be present in the Arab region every year.

Another story from the experience of President, during his visit to the United Arab Emirates (UAE). Cabinet Secretary Pramono Agung which always accompanies the presence of President during in the Middle East, saying that there has never been that a head of state that was present in the UAE was treated to lunch in the open and public area.” As it turned out, this way shows familiarity of Crown Prince,” Pramono said, in Doha, Qatar on Monday (14/9) afternoon, local time.

In fact, familiarity, not only shown from selection of a place of the luncheon, but also, the trip of the President, from the luncheon to the hotel where President stayed, steered directly by the UAE Crown Prince Mohammed bin Zayed Al-Nahyan. “And in that car there were only two of them,” said Pramono.

Inside the vehicle, they speak a variety of things, including the willingness of the UAE to embed strategic investments in Indonesia.

Meanwhile, the Emir of Qatar Sheikh Tamim bin Hamad Al-Thani, in addition to discussions about investing in Indonesia, he asked the flight from Jakarta to Doha, which is only two times in a day could be increased frequency. “In addition, the Emir of Qatar also asks the Doha-Surabaya flight not only twice a week, but every day,” said Cabinet Secretary. (Tim Komunikasi Presiden/ES)/Sy.