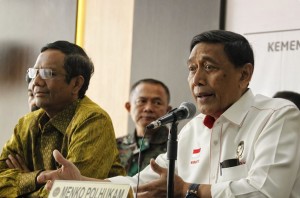 Coordinating Minister for Political, Legal and Security Affairs Wiranto has said that the Jakarta riot occurred on 22 May 2019 was planned to delegitimize election organizers, delegitimize the Government, disqualify the election winner and assassinate high-ranking officials.

Wiranto added that the security forces have succeeded in preventing planned terrorist attacks during the riot and in preventing mob attack in shopping centers and Chinatowns.

“The security forces have foiled (the assassination plot) and have arrested the executors, Wiranto told journalists at the Office of Coordinating Ministry for Political, Legal and Security Affairs, Jakarta, Tuesday (28/5).

The Coordinating Minister went on to say that the riot would not have occurred if all parties had obeyed the constitution. The security forces have called on all parties in the last elections to obey the law and resolve all issues in a legal framework.

He further said that there was a systematic plan to make the victims in the riot martyrs to trigger national chaos.

Wiranto also stated that in dealing with the demonstrators, the security forces have acted professionally and carefully in accordance with the Standard Operating Procedure, using defensive and persuasive approaches.

“Even if there are excessive measures that violate the procedure, the Police have formed a Fact Finding Team in collaboration with the National Human Rights Commission to take legal action (against the violation),” the Coordinating Minister said, adding that the security forces have arrested the rioters and have collected a lot of evidence for further investigations.

On that occasion, he also praised Prabowo Subianto-Sandiaga Uno pair who has filed suit in Constitutional Court regarding allegations of fraud in the election.

Wiranto called on the public to keep calm and not to be affected by rumors, particularly those are circulated in the cyberspace. “The Indonesian National Defense Forces (TNI) and the Indonesian National Police (Polri) are united and are always ready to maintain security and public order,” he said. (Humas Kemenko Polhukam/ES)