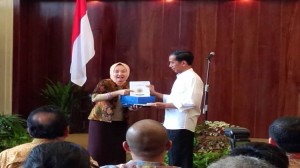 President Joko Widodo (Jokowi) expressed his wishes to undertake soon a number of infrastructure projects, like Trans Sumatra roads, Trans Sumatra railways, Kalimantan toll roads, and Kalimantan railways. He even wanted to realize his wishes as soon as possible and he demanded that such projects must start next year.

In Lampung yesterday, I summoned the ministers, like the Minister of Transportation, the Minister of Public Works, and the Minister of State-Owned Enterprises. We have pointed the locations and made the decisions. The projects mustve started in next February, President Jokowi said when he was delivering his general lecture in front of Yogyakarta Gadjah Mada Universitys (UGMs) community of scholars on Tuesday (8/12).

President Jokowi admitted that several ministers asked him about how to obtain the money to undertake such projects. He asserted that in his capacity as the President, he will take charge of the money.

President Jokowi stated that one of our main problems lies in logistics and distribution. There are many products produced in forests or isolated areas which cannot be transported or distributed to cities or other areas because of lack of means of transportation. Thats where our problem lies.

Infrastructures, intercity connectivity, and interisland connectivity are crucial and become our main keys. China can make dramatic leaps because of its infrastructures which were built quickly, President Jokowi stated.

Therefore, President Jokowi said, we will build 24 harbors. He wants all ministers to start building soon. As regards the money, he confirmed that the money is available but he still makes it secret. If I make it public, all ministers will immediately propose extra budget, while I really want to focus on the budget I have aimed at. For example, Tanjung Priok harbor will be able to accommodate 15 million TEUs (twenty-foot equivalent units) per year from 2017 on, he explained.

On that occasion, President Jokowi also expressed his wishes to build Trans Papua railways. However, such a venture has never been studied, and thus, he demanded that in the next 6 months, such a study mustve been completed.

President Jokowi called attention to the fact that infrastructure development will cost more if delayed. He pointed some proofs. For example, the delay in Jakartas infrastructure development causes complication and considerable increases in costs. In addition to the enormous costs, the land acquisition is also complicated. Some people who dont want their land to be expropriated file suits against the Government, he stated.

Those fuel oil subsidies, President Jokowi continued, can be diverted to more productive sectors, such as building railways which costs IDR 360 trillion per year, compared with IDR 280 trillion allocated for fuel oil subsidies. We seldom realize such facts, while logistics management is very crucial for every country, he explained.

For that reason, President Jokowi wants to make changes. Fuel oil subsidies will be diverted to productive ventures, from mere consumption to productive uses. Therefore, immediately after my inauguration, I have announced the diversion of fuel oil subsides, not fuel oil price increases, he explained.