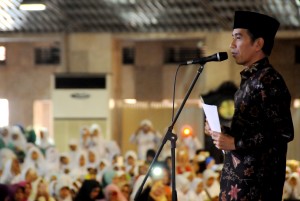 President Joko Widodo delivered a remarks on the Declaration of National Santri Day, at Istiqlal Mosque, Jakarta on Thursday (22/10)

In his remarks, President Jokowi said that the history had showed that santri had sacrificed their lives to guard the independence of Indonesia and to materialize the goals of the indepedence.

In their own ways, santri, he added, joined all national elements and fought against the colonialists, as well as re-grouped with isolated areas, set the strategy and taught about the meaning of  indepedence.

Considering the history and their roles to safeguard the Unitary State of the Republic of Indonesia (NKRI) and also considering the roles of the figures of santri in the history, among others; KH Hasyim Asari, KH Ahmad Dahlan, KH Ahmad Hasan, Syech Ahmad Suropati, Kiai Mas Abdurahman, and through the deliberation by Nahdatul Ulama, Muhammadiyah, Persatuan Islam (Persis) Muslim group, Al Irsyad, Mathaul Anwar and all considerations, the Government  has decided to make October 22 as the National Santri Day, President Jokowi said.

With the declaration, President Jokowi said the nation was expected to always remember to emulate the spirit of jihad from our predecessors in the context of Indonesia, the spirit of nationality, as well as the spirit to sacrifice for the nation and country.

By inheriting the spirits, I hope santri, either they come from the Islamic boarding school (Pesantren) or not, and nation’s next generation can strengthen the spirit of Islam and nationalism, the President added.

President Jokowi also believed that the santri would always remember to ignite jihad to the nation, country and our beloved Indonesia, as well as remember to strive for the prosperity and justice for all people in Indonesia.

The President hoped the santri could increase their knowledge and technology for the sake of the nation’s progress and through the spirit, Indonesia could be optimistic in facing challenges and obstacles in the way.

By implementing those spirits, President Jokowi believed that the National Santri Day would not create social barriers or trigger polarization between santri and non santri; on the contrary, it would strengthen the spirit of nationalism and national integration and brotherhood.

This is a spirit that unites us for the sake of the nation, President Joko Widodo said.

The President believed in a diversity as a nation, either etnic, religion and cultural diversities, the values to respect and tolerance each other would arise, as well as the values to strengthen national brotherhood.

We announce it by this Presidential Decree, it is declared that October 22 is the National Santri Day but it is not a holiday, Cabinet Secretary said in his press statement after a limited meeting on tourism on Thursday (15/10) at Presidential Office, Jakarta. (DID/RAH/ES) (RAS/EP/YM-Naster/Sy)