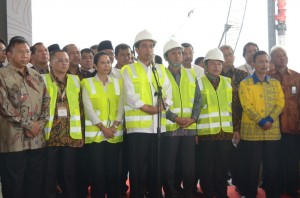 President Joko Widodo (Jokowi), accompanied by the Governor of North Sumatra Gatot Pujo Nugroho and Minister of SOEs Rini Soemarno launched the start of construction of seven strategic projects in North Sumatra, which was centered in the port of Kuala Tanjung, Batubara District, North Sumatra, on Tuesday (27/1).

The project includes the construction of a port and industrial area of Kuala Tanjung Sei Mangkei, aluminum diversification project, as well as toll roads Medan-Binjai.

In his remarks, President Jokowi admitted that he was surprised to get a report from Governor of North Sumatra Gatot Pujo Nugroho, that the industrial area of Kuala Tanjung Sei Mangkei was standing in an area of 2000 hectares, not including the port area of 200 hectares.

According to President Jokowi, this is the first project and very ambitious. However, after looking from top to bottom, President Jokowi believes that this is a very realistic project but had to be done by mutual cooperation. This is an integrated project. We expect, I give the target in two years, to be completed in March and I have inaugurated,” Jokowi pleaded.

“We expect, this region become the first largest port area in west Indonesia with a final capacity of the port is 60 million TEUs per year, Tanjung Priok in two years, could only reach approximately 15 million,” President Jokowi said.

“It’s all be semi-finished materials or finished goods and we want the value of the export also increased, and in the end our trade balance become surplus and positive, and of course our economic growth will be able to jump up as high,” Jokowi said.

Governor of North Sumatra Gatot Pujo Nugroho said, totally, the declaration of Integrated Industrial Zone Kuala Tanjung-Sei Mangkei with area that covers 7,000 hectares. While in PLN project is the substation construction of 500/150 kV at Sei Mangkei. Then the construction of cooking oil factory with a capacity of 600,000 tonnes/year that located in Sei Mangkei conducted by PTPN III.

Related to Medan-Binjai toll road, according to the Governor, that will be unveiled is one of the four sections the first phase development of the Trans Sumatra, Medan-Binjai along 17 km (main road) that consists of Semayang-Binjai 4.17 km, Helvetia – Semayang 6.14 km and Tanjung Mulia-Helvetia 6,33 km.

The construction of docks of the Port of Kuala Tanjung in the form of Multipurpose Terminal by PT Pelindo (Persero) I, planned along the 400 meters and 2.7 km length of trestle. In addition, the construction of storage tank with a capacity of 145,000 tons and container yard with capacity of 400,000 TEUs.

While the project at PT. INALUM in the form of diversification of development product of aluminum smelting factory that will process the ingots become billets.

Then there is the development of cooking oil mill with a capacity of 600,000 tones/year which located in Sei Mangkei that conducted by PTPN III.

“The project will change the face of the economic future of North Sumatra, from production-based on economy of raw materials, become the downstream industry that certainly gives greater added value,” he said  (Humas Setkab/ES)