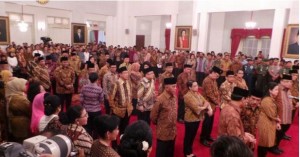 Working Cabinet Ministers, when sworn in by President Joko Widodo, at the State Palace, Jakarta, Monday (27/10)

President Jokowi takes the oath of the Working Cabinet Ministers by read the script of the oath, which followed by the ministers, which says among others:

“By Allah I swear, that I was to be appointed to this position, directly or indirectly, with the name or argument of any kind, doing not give or promise, or would give anything to anybody.

That me to do or not do something in this position, not to receive anything directly or indirectly, any promise or gift.

That I faithful to the Constitution of 1945, and will be responsible for all the laws and regulations applicable to the Republic of Indonesia, that I will be faithful to the homeland, and will fulfill all the obligations that were passed on to me by this position.

That I will perform the duties and obligations with a sense of responsibility to the nation “.