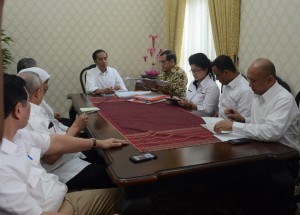 Just arriving from the United States, President Joko Widodo immediately led a limited meeting at the office of the Regent of OKI, South Sumatera, on Thursday (29/10) morning

After arriving at the official residence of the Regent of Ogan Komering Ilir (OKI), South Sumatera, on Thursday (29/10) afternoon, President Joko Widodo immediately invited several ministers to have a limited meeting on haze disaster. The President also finished a number of unfinished works due to his visit to the United States since last Saturday (24/10).

Cabinet Secretary Pramono Anung said that President Joko Widodo chose to work in OKI because he wants to immediately see a number of hotspots. In addition, today, there will be a humanity program, organized by the Minister of Social Affairs Khofifah Indar Parawansa and Minister of Health Nila Moeloek.

Moreover, the President will also monitor the remaining hotspots and is scheduled to visit Suku Anak Dalam in Jambi, Pramono said to the journalists at the official residence of OKIs Regent, South Sumatera, on Thursday (29/10).

Hopefully the weather is good so that the President can enter Jambi and Palangkaraya, Pramono said.

The President is scheduled to use helicopter to visit Jambi because the Presidential Plane will not be able to land.

It works well because when the President was in the US, everyday Coordinating Minister for Political, Legal, and Security Affairs was in the field to confirm a number of spots that will make the peat wet. We will check several areas that has been prepared and visited by the Minister, Pramono said.

If the effort is succeed (to make the peat land wet), Pramono added, it will be a long term role model to handle peat problems. Thus, in the future, when an area is burned we already know how to handle it.