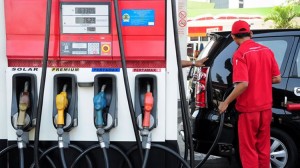 Although the premium fuel prices rise, according to the Head of Public Communication Ministry of Energy, Abdurrahman Saleh, the selling price of kerosene remained at Rp 2,500/ liter. Similarly, the price of diesel fuel remained at Rp 6,400/liter.

The increase in fuel price premium cannot be separated from the growing strength of oil prices on the world market. According to a press release of the Ministry of Energy and Mineral Resources, the average price of a market index of diesel oil (MOPS gasoil) during February 2015 increased in the range of 62-74 dollars a barrel, while the premium MOPS increased in the range of 55-70 dollars per barrel.

“The increase of MOPS in February is actually quite significant. However, the government did not raise the price of diesel fuel, and only raise the price of premium fuel assignment outside of Java-Madura-Bali Rp200/liter to maintain economic stability and considering the difference in price during February,” Abdurrahman Saleh said.

Head of Public Communication, Ministry of Energy and Mineral Resources added, to maintain public accountability, government auditors and the Audit Board (BPK) to audit the actual volume of distribution of certain types of fuel and special assignments, the amount of the basic price, the cost assignment in the specified period, the amount of subsidy, and utilization of excess-over retail price. (Puskom Kementerian ESDM/ES)