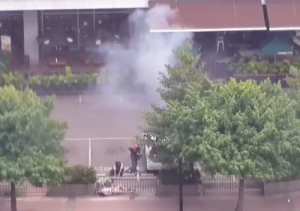 A series of bom and gunfire attacks near Sarinah shopping mall on Jalan Thamrin, Central Jakarta, on Thursday (14/1) that killed civilians, security forces, and the attackers was claimed by the Islamic State in Iraq and Syria (ISIS).

World leaders also conveyed their deepest sympathies and condolences to the families of the victims and to Indonesian people and the Government.

The Secretary-General condemns the bombings and gun attacks in Jakarta today.  He extends his condolences to the families of the victims and wishes those injured a speedy recovery.  He expresses his solidarity with the Government and the people of Indonesia, as the United Nations said in the press conference.

Besides extending sympathy, the United Nations also stressed on the needs to bring the perpetrators, masterminds, financiers of the despicable action to justice.

One of the important point is to stress the needs to take some measures to prevent and repress the financial, organization, individual of the terrorism according to the United Nations Security Council Resolution Number 2199 and 2253 of 2015 on the closure of all financial sources of the Islamic State in Iraq and Syria (ISIS) terrorism group.

Beside the United Nations (UN) Secretary General, several leaders of neighboring countries also conveyed their sympathies and solidarity to the Indonesian Government and people.

Some of them was delivered through social media, including the Prime Minister of Australia Malcolm Turnbull via his Twitter account @TurnbullMalcolm.

Shocked & dismayed by news of the #JakartaBlasts. My thoughts are with the Indonesian people, Prime Minister Lee said.