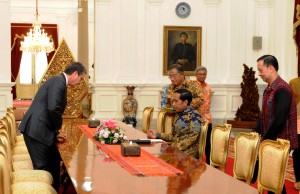 President Joko Widodo, accompanied by Coordinating Minister for the Economy and Minister of Trade, receives Director-General of the World Trade Organization (WTO) Roberto Azevedo, at the Merdeka Palace, Jakarta, on Wednesday (13/4) afternoon

On that occasion, on behalf of WTO Azevedo appreciated the Indonesian Government for successfully organizing the WTO Summit in Bali as well as for Indonesias role in supporting the Summit in Nairobi.

Minister of Trade Thomas Lembong, who accompanied the President in the meeting, said that Indonesia is a special country, a developing country as a member of the G-20; thus,  Azevedo asked Indonesia to continue playing constructive and positive roles for the WTO.

According to Lembong, Azevedo praised the agenda of economic reforms that the Indonesian Government has implemented.

Azevedo also gave his credit to President Jokowi for the agenda of economic reform, Lembong said to the reporters after the meeting.

The Minister added that the economic reforms through the 1st to 11th Economic Policy Packages was appreciated by international community. He also said that the launching of the economic packages is considered as the Governments seriousness to create a favorable investment climate.

We can assume that all countries in the world are now looking at us or even they might follow Indonesias economic reforms implemented by the President, Lembong said.