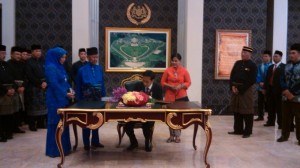 Before attending the dinner, President Jokowi and First Lady fill the exclusive attendance list for the State Guest at the State Palace, and welcomed by Yang Di-Pertuan Agong accompanied by his wife.

State banquet was held with the full intimacy atmosphere between the two countries. After following the state banquet, President Jokowi and First Lady returned to the Shangri-La Hotel, Kuala Lumpur. 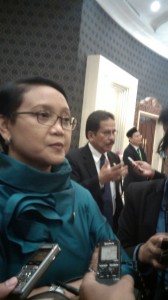 Meanwhile, Minister of Foreign Affairs Retno L.P. Marsudi said, the target of the President’s state visit to the neighboring country is intended to improve bilateral relations between Indonesia and Malaysia.

“In addition, the momentum of this state visit also, within the framework of ASEAN, this is very strategic since Malaysia in 2015 became the Chairmanship of ASEAN, which was previously held by Myanmar,” Retno said to reporters in sidelines of a state banquet on Thursday (5/3) night.

The number of trade transactions between Indonesia and Malaysia, now reaches 24 million US dollars, and targeted to increase to 30 million US dollars. In addition, the focus of the President’s visit also to discuss the matters related to employment or migrant workers.

As Chair of ASEAN, said Minister of Foreign Affairs, Malaysia plays an important role and one of the neighboring country closest to Indonesia. (EN/ES)