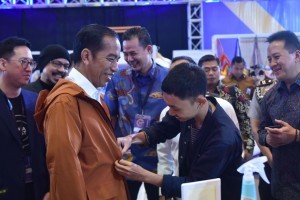 Millennials are the future of Indonesia, President Joko Jokowi Widodo has said.

“I believe that you are the future of Indonesia, the President said at the opening the 2018 IdeaFest at the JCC, Jakarta, Friday (26/10).

The President added that the world is changing rapidly, citing the data from McKinsey Global Institute, that the 4.0 Industrial Revolution is 3,000 times faster than the first industrial revolution.

“When I learned the Internet of Things, artificial intelligence emerged, then virtual reality, Bitcoin, and Cryptocurrency emerged. Everything is changing so fast: Robotic Advance, Elon Musk,” the President said.

President Jokowi also expressed his pride that in recent years Indonesia has had 4 unicorns, including Zaky with Buka Lapak, William with Tokopedia, and Nadiem with Gojek. “I’m happy that technology from Indonesia can give impact to other countries. That’s what I want,” President Jokowi said.

President Jokowi went on to say that the Government has developed vision and grand design for the future of Indonesia to make sure that the nation is not left behind and maintained that the 2018 IdeaFest is a medium for discussing innovations based on science and technology and future major missions, thinking out of the box, strategizing ideas, and formulating strategies of ideas to become a reality. The event also shows that millennials are pioneers of innovation, he added.

Nevertheless, President Jokowi reminded the participants that smart ideas still need smart execution because ideas will not be materialized without smart execution; thus, collaboration between planners and implementers, thinkers and creators, industry and the Government are needed.

Also present during the event were Minister of State Secretary Pratikno and Head of the Creative Economy Agency (Bekraf) Triawan Munaf. (FID/JAY/ES)