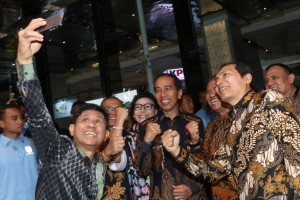 President Jokowi poses in a wefie with the Corruption Eradication Commission (KPK) leaders at the commemoration of the International Anti-Corruption Day, at Bidakara Hotel, Jakarta, Tuesday (4/12). (Photo by: OJI/PR Division)

The MLA is a legal platform for tracking corruption-derived money and money laundering hidden abroad,   the President said in his remarks at the commemoration of the International Anti-Corruption Day and the Opening of the 2018 National Conference on Corruption Eradication, at Bidakara Hotel, Jakarta, on Tuesday (4/12).

President Jokowi asserted that corruption eradication efforts should be maximized by strengthening prosecution and prevention.

This must be a national movement; our movement that will be implemented not only by state institutions but also civil society and the public, the President said adding that the movement is also part of our efforts in developing Indonesia towards corruption-free country that is productive, innovative and efficient.

The Government continues to maximize efforts to prevent and eradicate corruption through electronic-based community service systems, such as e-ticketing, e-samsat, e-procurement, e-budgeting, and e-planning.

Public complain system, such as Saber Pungli (illegal levies eradication task force), also receives positive responses from the public. More than 36,000 complaints are received by this task force. There are also some innovations that have been implemented, the President said.

According to President Jokowi, the issuance of Presidential Regulation Number 54 of 2018 on National Strategy for Corruption Prevention is part of the Governments efforts in developing a more comprehensive and systematic preventive system.

The Presidential Regulation appoints the Corruption Eradication Commission (KPK) as the coordinator of the national team to prevent corruption, President Jokowi added.

In addition to this Regulation, Government Regulation Number 43 of 2018 on Procedures for Implementing Public Participation and Awarding in the Prevention and Eradication of Corruption is also issued. Once again, this is part of public participation. Regarding the award, it will be given after we process it, he added.

President Jokowi believes that developing a fast and efficient work culture needs to be done in order to cope with corruption eradication efforts. He reminded all that global challenges and competition are getting more complex.

In the world that changes rapidly, being fast is a key to win the competition. Once again, speed is the most important key in winning the competition, the President said adding that big countries don’t necessarily beat the small one, the rich dont necessarily beat the poor, but the fast one always defeats the slow. Those who take the risk to innovate will defeat those who just live a monotonous routine.

Therefore, he called on all parties to improve our work ecosystem and move faster. Cut unnecessarily long process in ministries, institutions, and regional governments be it in regencies, cities, and provinces. Simplify regulations that hinder our plans, implement debureaucratization, increase efficiency, and change our paradigm from procedure-oriented to goal-oriented, the President asked.

Developing a work ecosystem that can support efficiency and innovation should be integrated with corruption eradication efforts, and must be implemented as a common agenda between the Government and the KPK.