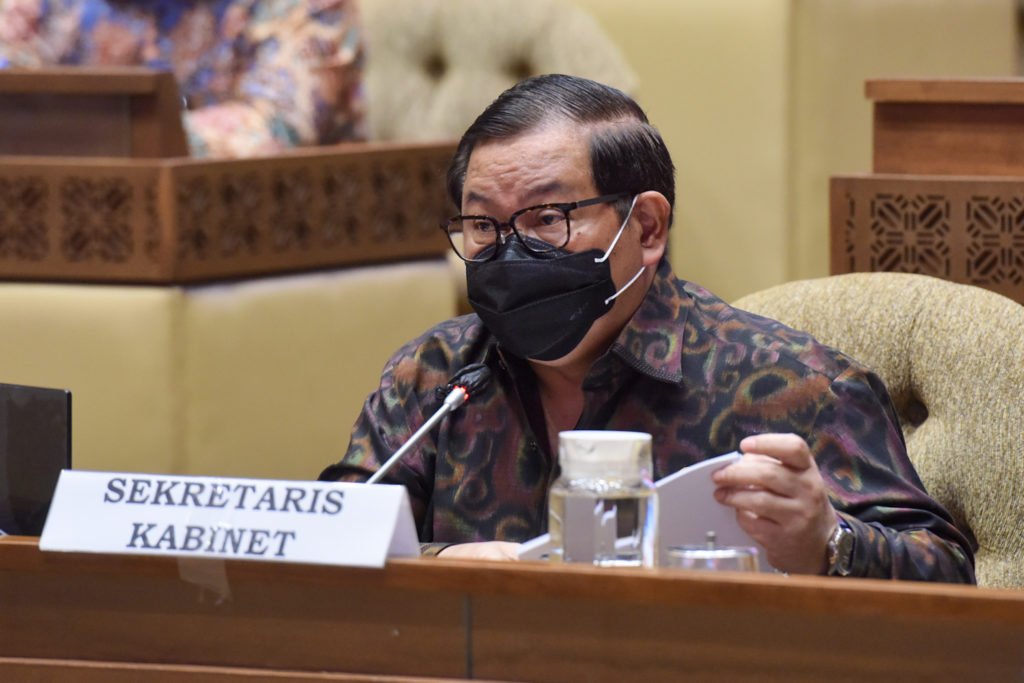 Cabinet Secretary Pramono Anung attends a working meeting and hearing with Commission II of the House of Representatives in Jakarta, Monday (20/09). (Photo by: PR/Jay)

“Under the supervision of ladies and gentlemen, for nine years, Cabinet Secretariat has always received Unqualified Opinion, meaning that its financial management has been going well,” said the Cabinet Secretary in a working meeting and hearing with Commission II of the House of Representatives in Jakarta, Monday (20/09).

On the occasion, the Cabinet Secretary also explained the realization of the Secretariat’s budget which reached 92.29 percent. “The total budget of the 2020 Revised State Budget [of the Cabinet Secretariat] is Rp250 billion. The realization is Rp231 billion while the remaining budget is Rp19 billion. This means that the percentage is 92.29 percent,” he said.

He expressed belief that the realization of the 2021 budget will be more or less the same as that of last year, approximately 92-93 percent.

During the meeting, the Cabinet Secretary also proposed an additional budget of Rp39.96 billion for 2022. The additional budget will, among others, be allocated for the activities of the Special Millennial Staff of the President as a follow-up plan to the directives of the President, the integration of the Cabinet Meeting Information System or e-cabinet, procurement of equipment for holding Cabinet meetings, and preparation of presidential manuscripts and translation.

He expressed hope that the additional budget proposal will be approved.

Meanwhile, the Commission II of the House, as stated by Chairperson of the Commission II Ahmad Doli Kurnia Tandjung, approved the Cabinet Secretariat’s budget ceiling of Rp326.32 billion to be set as the Budget Allocation Ceiling (Definitive Ceiling) of the Cabinet Secretariat for 2022, with the budget allocation for the Cabinet Management Support Program of Rp288.86 billion and the President and Vice President’s Service Delivery Program of Rp37.45 billion.