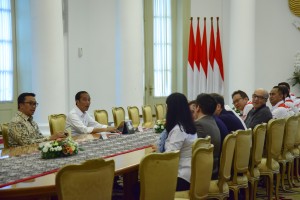 The Indonesian Government has expressed commitment to host the 2021 MotoGP race in Mandalika Special Economic Zone in the resort island of Lombok in West Nusa Tenggara (NTB) province, Minister of Youth and Sports Imam Nahrowi has said.

He added that the Indonesian Tourism Development Corporation (ITDC) – the operator of the Mandalika region  has also inked a deal with Dorna Group on the hosting of this prestigious event.

Dorna CEO Carmelo Ezpeleta has met with President Joko Jokowi Widodo and the Government will fully support the preparation for infrastructure and facilities, as well the hosting of 2021 MotoGP race, Imam told reporters after accompanying the President during the meeting with ITDC President Director Abdulbar M. Mansoer and Dorna CEO at the Bogor Presidential Palace, West Java, Monday (11/3).

He went on to say that this is good news for all Moto GP fans in Indonesia and the most important thing is that Indonesia has been confirmed to hold the event. The hosting of 2021 MotoGp, he added, will also bring broad impacts on the countrys tourism and economic sectors, as well as its sports achievement.

In the meantime, as part of infrastructure development ahead of the event, President Jokowi has ordered related institutions to provide access from the airport to Mandalika, extend the airports runway, and  expand seaports to provide direct access to the neighboring Bali, which has more hotels than Lombok.

As many as 100,000 people are expected to watch the race and the number of hotels available in Lombok is deemed not sufficient to accommodate them. The ITDC will coordinate with Ministry of Tourism to properly prepare the event, Imam said.

Regarding the achievements of Indonesian MotoGP riders, Imam said that now they are in Moto 2 and they will be upgraded to a higher level. One of Indonesias riders named Dimas comes from Lombok. So, Dimas will be our first rider to compete in Mandalika in his hometown, the Minister said. (EN/AGG/ES).