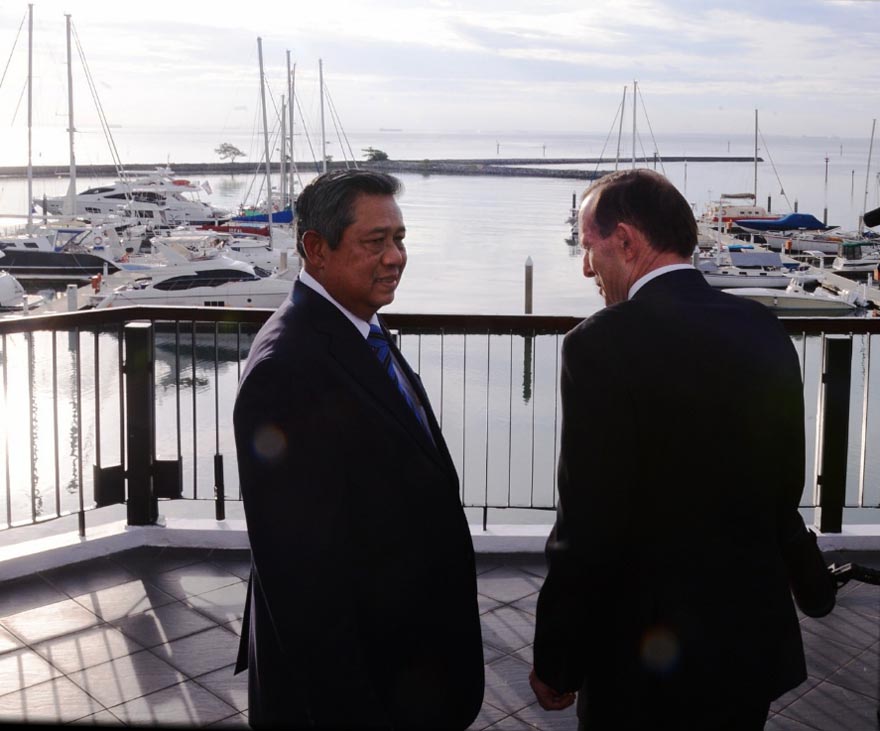 On June 4th 2014, on the Island of Batam, President Susilo Bambang Yudhoyono received Australian Prime Minister Tony Abbott at the Nongsa Point Hotel.  The meeting began with a tete a tete followed by a joint press statement and concluded with a dinner session with delegate members.

The 1+2 meeting at the Chailendra meeting room, overlooking the harbor went for just under an hour.  It was expected to discuss many bilateral issues and also outlook on regional and global issues.

In his press statement, President Yudhoyono conveyed the following ideas in Indonesian

Bismillahirrahmanirrahim, Your Excellency, Mr. Prime Minister Tony Abbot, distinguished Ministers, and also dearly beloved reporters. Alhamdulillah, I have just concluded very good meeting with the Prime Minister of Australia. The meeting was very productive and very constructive. We discussed efforts to safeguard and further enhance the cooperation and partnership between our two countries, our two nations, so that we may establish a better future, a future based on the principles of mutual benefit and mutual respect.

As you may already know, in general the relations and cooperation between Indonesian and Australia are in a good condition, even though at times there may arise some bilateral issue or problem. And that is quite common for any two neighboring countries; for two countries that are very friendly to one another. And despite such events, we still maintain the spirit of finding a solution. The best solution and the wisest solution so as to resolve such a matter. Hence, that is the spirit and commitment that both I and the Australian Prime Minister possess when we are confronted with such an issue or a problem

In todays meting, apart from discussing again steps for more effective cooperation in the field of economics, such as trade and investment, and also food security, and education, and also cooperation in combatting transnational crime, we also discussed matters relating to regional dynamics and developments

Of course, an important point in our discussion during todays meeting was Australias and Indonesias efforts to overcome and resolve one issue that almost distracted, had briefly interrupted, our bilateral relations and that is the wire-tapping or surveillance issue last year in 2013

The truth is, joint efforts to overcome such an issue and for it to not happen again have been taken and will continue to be taken. And both Foreign Ministers have discussed the matter on several occasions.  Indonesia has also submitted a proposal so that a protocol and a code of conduct can be agreed upon in the very near future. Therefore, every process we take can contribute to our efforts to enhance the cooperation between our two countries.

And of course, we share the same spirit to resolve this matter.  So that once all of this has been resolved — the best way possible– while still having other cooperations continue, we may also discover new opportunities and also a new agenda for future bilateral cooperation.  For example, cooperation in intelligence- something that is very much needed for the interest of our two countrys- can also be resumed and further strengthened.  So too in the field of military cooperationthe Australian military, the Indonesian military, which is our common interest  may also be resumed and further enhanced. ?In short, what we can do to resolve this issue that interrupted the good relations between Australia and Indonesia, can still later bring great benefit, because we know that both nations, the nation of Indonesia and the nation of Australia desire to always be good friends

We know that almost one million Australian tourist visit Bali and Indonesia, while there are some 150.000 Indonesian university students and other students currently learning in Australia.  Therefore, in truth, the people to people relations are strong and progressive.

In that context, and in the common interest of both Indonesia and Australia, we have agreed to resolve the matter that almost interrupted our bilateral relations.  And from then onwards, we agreed to explore new opportunities for cooperation for the interest of both of Australia and Indonesia President Yudhoyono conveyed.

In reply to President Yudhoyonos statement, PM Abbott conveyed his views on the close relations between Australia and Indonesia and the hopes for continued and stronger relations.

Bapak. President, Thank you so much. Thank you so much for the invitation to Batam island. Thank you so much for the warmth and cordiality of our discussion today, and thank you for the consistent friendship that you have shown to Australia over the last decade. This is a very important relationship to Australia. Indonesia is a significant trading partner, it is an increasingly important source — of people, of ideas, of strength — to Australia. And I want this relationship to go from strength to strength in the months and years ahead. My first overseas visit as Prime Minister was very fittingly –to Indonesia, and I look forward to many visits to this marvelous country in the years ahead

One of the great things about this relationship is that– on those rare occasion when there are problems, we talk them thru. We speak candidly to each other and thats exactly whats happened between myself and Bapak President, today.  Yes, there have been a couple of issues between our countries over the last few months, but I am confident that they are well on the way to resolution. A satisfactory and successful resolution

The people smuggling issue is well on the way to resolution because, the boats that were coming to Australia have almost entirely ceased to come. So I believe, this is an issue which will not substantially further trouble us.

The intelligence issue is one that I believe will be resolved by the process under way between the foreign minister of Indonesia, His Excellency Marty Natalegawa and Australias foreign minister, Julie Bishop. I believe that this can successfully be resolved to the mutual benefit of our countrys, because intelligence sharing in dealing with common problem is the way forward for both of us

I want to stress that this is a strong partnership between Indonesia and Australia. Indonesia and Australia are I believe, trusted partners of each other, Our economic links are growing all the time. And Im delighted to say that Australias role in contributing to Indonesias food security is stronger today than it was 12 months ago

I am pleased that our people to people link are improving all the time. And shortly of the 1st new Colombo plan flyiers and scholars will be arriving from Australia, here in Indonesia. And on the 25thof June, the 1st Yudhoyono fellow will be announced in Australia.

And, I think there is great potential for Australia and Indonesia to work together for the peace, stability and security in our region and in intelligence sharing is important part of that

I want congratulate Bapak President Yudhoyono for the leadership, that he has shown, not just here in Indonesia, but in this region and in the wider world over the past decade. President Yudhoyono has been one of the senior Statesman, perhaps the senior Statesman of ASEAN and has helped to make ASEAN strong and more influential in the councils of the world. I want to stress that a strong ASEAN is important to our region, its very important to Australia

I also want to stress Australia continuing support for the Lombok treaty, and our absolute understanding of the primacy of that treaty, in the relationship of two countries. Our total support for the territorial integrity of Indonesia

Finally, may I say that when President Yudhoyono leaves office, Indonesia will have lost a statesmen. and Australia will have lost friend. Im sure that Indonesia will have more statesman in the future and I know Australia will have great friends in this country in the future. but President Yudhoyono has been a great president, and good friend to Australia, and I believe that when the history of Indonesia is written, the Yudhoyono presidency will be a watershed, marked by peace abroad, prosperity at home, of the consolidation of democracy and the strengthening of national unity. This is a marvelous legacy that you, Bapak President, leave your country.  And I have to say that I have been proud and thrilled and honored to get to know you over the last few years, I will be very please and proud and honoured to call you friend, in months and years and decades ahead. Thank you so much Bapak Yudhoyono PM Abbott stated.

The meeting concluded with a dinner hosted by President Yudhoyono for Prime Minister Abbott and both their delegations.  The Australian delegation then departed the Nongsah Hotel for the airport where they would continue their journey to Europe.