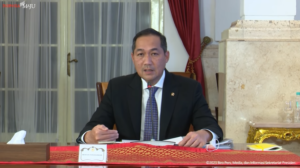 There were two main issues raised by business actors from the APEC countries to Indonesia during the APEC Business Advisory Council (ABAC) Dialogue with Economic Leaders, Thursday (11/11/2021), Minister of Trade Muhammad Lutfi has said.

The first issue is regarding Indonesia’s main priorities after the COVID-19 pandemic, including the completion of vaccinations and to reopen borders in a bid to speed up economic recovery.

“First, regarding Indonesia’s main priorities after the pandemic, including how to complete vaccinations and to reopen borders in a bid to speed up economic recovery. The Government should prioritize health while keeping the economy going,” Lutfi said in a virtual press statement.

The second issue is, he added, on how Indonesia turned challenges into opportunities, especially to empower minority groups such as small and medium business women and residents who have not yet entered the world economic system.

The Minister further explained that the issue of digitization is one of Indonesia’s commitments to turning challenges into opportunities. According to him, 84 percent of digitalization in Indonesia has benefited MSMEs.

“This is a commitment from Indonesia, especially to the issue of digitalization since 84 percent of Indonesia’s digitization has provided benefits to the MSMEs. This is one of our opportunities for the future,” Lutfi said.

Concluding his statement, he said that the ABAC meeting, which lasted for about an hour, was chaired by a moderator from Singapore and attended by leaders from the United States, Chile, Singapore, and world business actors. (MAY/AIT/SLN) (EST/MUR)