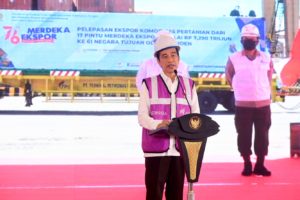 During the launch, the President expressed his appreciation to all stakeholders in the agricultural sector from upstream to downstream for the hard work in fulfilling national food demand and increasing agricultural exports.

“I’d like to extend my highest appreciation to the farmers, ranchers, planters, agribusiness actors, and other agricultural stakeholders who have worked hard during the pandemic to meet the food demand of the community and increase agricultural products exports,” he said.

“The increase in agricultural commodity exports can enhance the welfare of farmers as well,” the President said.

In addition, the Farmers Exchange Value (NTP) also continued to improve. In June 2020, the NTP reached 99.60, then it consistently increased until December 2020 at 103.25, and it reached 103.59 in June 2021. “This is good news that can encourage the enthusiasm of our farmers to stay productive during the pandemic,” he said.

On that occasion, the Head of State also welcomed the export of agricultural commodities in the form of rice to Saudi Arabia as the destination country. However, he also reminded relevant stakeholders to prioritize the fulfillment of national demand.

At the end of his remarks, the President ordered his Cabinet to continually strengthen the market for agricultural commodities both domestically and overseas.

“For the domestic market, we encourage people to love and buy our own agricultural products, and to consume healthy food produced by our own country. For the international market, we can start to enter the markets of non-traditional countries intensively and integrated, this is our opportunity, a good momentum during the pandemic so that the market potential is expanding,” he said.

In the meantime, Minister of Agriculture Syarul Yasin Limpo said that the total value of agricultural exports reached Rp7.29 trillion.

“The agricultural exports that will be released on this occasion are 627.4 million tons worth Rp. 7.29 trillion, including the first commodity for plantations as much as 564.6 million tons, food crops 4.3 million tons, horticulture 7.2 million tons, livestock 4 0.0 million tons, and other commodities,” the Minister said at Tanjung Perak Port, Surabaya, East Java Province.

The agricultural exports will be sent to a number of export destination countries such as China, the United States, India, Japan, South Korea, Thailand, Malaysia, England, Germany, Russia, United Arab Emirates, Pakistan, and several other countries.