President Jokowi: We Want to Win the Competitions 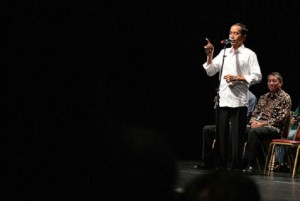 President Jokowi speaking before Indonesian Diaspora in San Francisco, the US

President Joko Jokowi Widodo in his remarks at the meeting with the Indonesian Diaspora at the Palaces Art Fine Auditorium, San Francisco, the United States, on Tuesday evening (16/2) local time, said that since the ASEAN Economic Community began in 2016, Indonesia has completely entered the era of regional and global competition.

It looks like ASEAN leaders are walking hands in hands, but actually we are in a competition, President Jokowi said.

The President added that although ASEAN leaders seem to be walking hands in hands, it does not mean that they can give one another.

In fact, they are our competitors, he added.

According to the President, Indonesia is facing not only competition at the regional level but also at the global level, such as the Trans Pacific Partnership (TPP) or the European Union (EU).

President Jokowi also said if Indonesia did not join the TPP, the countrys products would receive trade barriers of 15-20%, making them difficult to compete.

He also said that Indonesia must improve many things.

We have no choice but to prepare ourselves to win the competitions that lie before our eyes, he said, adding that one of the measures that the Government has made is by issuing 10 de-regulation packages in the past 5 months.

Were in a difficult position so we must have high flexibility to cope with volatile situation, the President added.

On that occasion, President Jokowi also pointed out 42,000 troubled regulations and 3,000 regional laws and hopes that at least half of them would be cut this year.

For the record, the meeting was attended by around 800 Indonesian Diaspora.