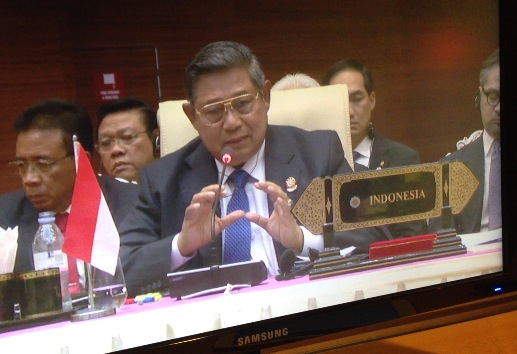 President Susilo Bambang Yudhoyono attended his last ASEAN Summit in Nay Pyi Taw, Myanmar after 10 years since he attended his first Summit in Viantianne in 2004.  The 24thASEAN Summit chaired by the Government of Myanmar was a special moment for President Yudhoyono because in 2011, when Indonesia was Chair of ASEAN, he made special effort to ensure Myanmar had the opportunity to also Chair ASEAN, despite receiving concerns from ASEAN Partner countries.

As the delegation arrived in Nay Pyi Taw, on board the maiden overseas voyage and first official visit for Indonesian Presidential Plane A-001, President SBY and Madame Ani were greeted by the Myanmar official guards. The meeting with ASEAN began with an Opening Ceremony, followed by a Leaders Plenary, Leaders Retreat, Leaders luncheon and also meeting with ASEAN Inter-Parliamentary Association (AIPA), ASEAN Youths and a closing session.  Following the day was also a meeting BIMP-EAGA, a bilateral meeting with the Prime Minister of Vietnam and also a special award from the Myanmar Chamber of Commerce for both Presidents.

During the plenary session the President conveyed his the outlook on the future of ASEAN, namely in preparing for an ASEAN Community next year, the role of ASEAN in the region and also its interactions with Partner Countries.

As the final ASEAN summit for President SBY, many leaders conveyed their thanks and appreciation to his contributions in the last ten years to make ASEAN better and respectable at the global arena.  Excerps of his statement are below.

Thank you for the kind words you have given to me, as this will be the last time I attend this ASEAN Summit, after 10 years, where every year we have met together.  I just want to convey two points in brief, what I have learned much from my friends here, in the cooperation at the ASEAN level.  If I may be frank and be truthful to you, the difference between ASEAN and the G7, G8, the EU and other regional organizations is this: its the culture and the values that we apply in ASEAN

Indeed it is a caring and a sharing community. Sometimes we are often giving and receiving. Sometimes we are very considerate to one another.  We build a consensus although we know that sometimes there are interests at the national level that may not always be the same with the interests of other ASEAN members.  But we are still able to find a meeting point. A meeting point that is wise.  Indeed it is not intended to be unbeneficial for any of the ASEAN members.

This is the beauty of ASEAN.  Whether it was tension between Thailand and Cambodia a while ago, we still possessed the spirit of family so we could stick together. When Myanmar faced embargo that were excessive, we sat together and discovered a solution.  We could not be dictated by any force outside our region.  Dictated about democracy and human rights or any other issues. Because we already realized that there were universal values that we must respect in accordance with ASEAN Charter. And we were able to reach some meeting point

And we cannot be pulled by major powers or super powers when we were facing conflict on matters of the South China Sea. But we also had the moral courage to remind anybody that they should not use their military might or their gunboat diplomacy. This in my opinion is our strength in ASEAN

I want to apologize if in the past 10 years I may have caused offence.  But I want to convey to you that, we in ASEAN have an approach. A good approach to other countries and to the world. We possess a mindset that is inline with the developments of the times.  And even though ASEAN is more rules based and more structured, we still remember that we are still a community.  We are a sharing and we are a caring community. Thats what I want to share with you.  Thank very much for the togetherness and the cooperation all this time

During the retreat, President SBY and other Leaders addressed regional and global issues, including the situation in the South China Sea, Syria and Ukraine.

During the AIPA Meeting, President SBY underlined the importance of closer coordination with parliament members to ensure maximum effectiveness of regional cooperation via not only the executive arm, but also legislative arm.  The ASEAN Youth meeting saw Leaders facing a highly charged and passionate youth declaration to which President SBY conveyed his full support to them and reminded the youths that they would be sitting in the leaders chairs in 2030. To this end, President SBY sought the partnership and cooperation of the youths with the governments in facing various developments and challenges.

The BIMP-EAGA Summit chaired by President SBY was attended by Sultan of Brunei Darussalam and President of the Philippines and also Minister from Malaysia to which the leaders once again expressed their appreciation for Indonesias chairmanship.

The Indonesian President also met with Vietnamese Prime Minister to discuss the latest situation in the South China Sea, to which President Yudhoyono instructed his Foreign Minister to play a bridging role between the foreign ministers of China and Vietname.

I will miss a true friend of Myanmar who understands and supports us whenever we are faced with a challenging situation.  Whenever Myanmar is faced with challenges, Your Excellency Bambang expresses his understanding on the true situation of our country at the international arena and as a true friend gives kind advise and suggestions in the best interest of our country. I would like to express my profound gratitude to the understanding you have shown and suggestions extended to us. Myanmar will miss you, Excellency, our presence here tonight is a reflection of our sincere appreciation to you.  We also express our appreciation to the people of the Republic of Indonesia for the support given to Myanmar and her wide ranging reforms and on going democratization process the Myanmar President stated.