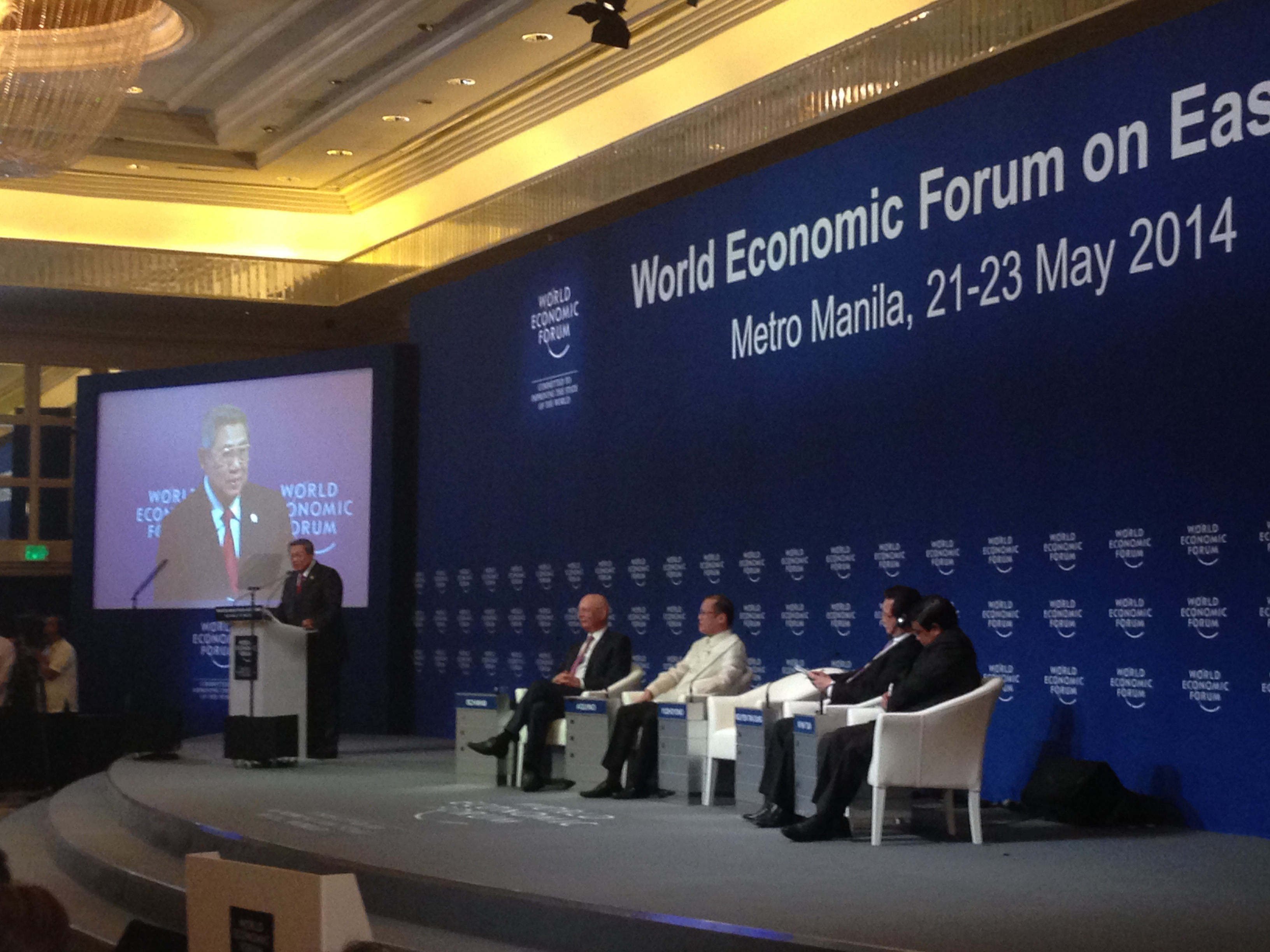 On the 22nd May 2014, President Susilo Bambang Yudhoyono and Madam Ani Yudhoyono and the Indonesian delegation, on board A-001, arrived in Manila, the Philippines to attend the World Economic Forum of East Asia and to conduct a bilateral meeting with the Philippines.  The last WEF-East Asia Meeting was attended by the President was in Bangkok in 2012, and where Indonesia hosted the forum also in Jakarta in 2011. President Yudhoyono also attended WEF in Davos back in 2011.

At the Makati Shangri-La in Manila, where the WEF-EA was being hosted this year, President Yudhoyono met with old friend Executive Chairman and Founder of WEF, Klaus Schwab and also shared the stage with President Aquino of the Philippines, Prime Minister of Vietnam, and Vice President of Myanmar.   Below are excerpts of his statement.

First and foremost, let me congratulate President Benigno Aquino the Third for hosting this event.  The selection of the Phillippines as the host of this years World Economic Forum for East Asia is a solid vote of confidence for this countrys remarkable economic achievements.  This is the last time I will have the honor to address this Forum as President of Indonesia — in the future, I will probably be sitting at the back of the room, and I hope Professor Schwab will be kind enough to give me good seats SBY stated

The croud laughed and clapped at the Presidents sense of humor

So from the bottom of my heart, I would like to thank Professor Schwab for your solid friendship over the years and for the WEFs enormous contribution to peace and progress.  The theme of this years event leveraging growth for equitable progress, is highly relevant for our region, and for Indonesias own development. We live in an extraordinary era.  Asia is in the midst of a revolution.  This revolution is quite a different kind than the explosive 20th century revolutions but equally – if not more – powerful.   This revolution is powerful because it has lifted hundreds of million from abject poverty.  It has led to an explosion of the middle-class.  It has changed the face of many cities and countryside.  It has soared productivity and creativity, creating and spreading wealth on a scale never before seen in history.  And it has changed the way Asians look at themselves, and in turn, the way the world looks at Asia SBY stated.

Today, Asia serves as the engine of global economic growth. Yet, despite Asia’s epic progress, this ‘revolution’ remains incomplete. According to the Asian Development Bank, approximately two-thirds, or about 800 million of the worlds poor, live in Asia. Some 1.7 billion people in Asia still lacking access to sanitation. Around 680 million are without access to electricity.  But as an optimist, I do see the glass as half full.  I believe our generation is now endowed with the resources and knowhow to beat age-old problems of poverty, deprivation and conflict He stated.

And within this region, as I have proposed to ASEAN, we CAN reach the goals of the ASEAN Development Agenda to double its GDP from 2.2 trillion US dollars to some 4.4 trillion US dollarsby 2030, while also halving poverty from 18.6 percent down to 9.3 percent.  Thus, the goal of equitable progress is within our reach.  In my view, at the heart of inequity is the question of : social and economic mobility.  I suppose we have to be realistic that there will always be people who are more well off than others.  But this becomes particularly problematic if mobility applies only for the few he added

The key challenge in addressing inequity is how to ensure that those at the bottom and middle also enjoy the same – if not more – socio-economic mobility as those at the top.  Hence, mobility for all.  And in this way, it does not matter how many billionaires and millionaires emerge so long as those at the economic bottom also get a ladder to a better life of opportunity and progress he continues

Is this achievable ?  I believe so SBY called out

 The best way to attain a society which ensures “mobility for all” is through education,  the best anti-poverty weapon.  One of the problems we faced in Indonesia was that the percentage of the poor in Universities was very small compared to the middle or upper class.  This is why my Government launched a new innovation in our education system.  We calibrated tuition fees at Universities, so that different students pay different fees according to their economic circumstances.  We also abolished University tuition fees for students from poor families, and on top of that, we give them a modest living expenses

Another way to promote mobility is by financial inclusion.  Since 2007, we have disbursed 150 trillion Rupiah of micro-credit credit for the poor (about 13 billion US dollars), many without need for collateral.  Some 11 million Indonesians have received micro credit loans, with very low rate of non-performing at 4 percent

I can attest to you that a predominant portion of the millions who received such micro credit have managed to raise their income, save a little more for their future, and changed their life for the better SBY continued

Another powerful way to promote mobility for all is through entrepreneurship, especially among the micro, small and medium enterprises.  I particularly like the concept of entrepreneur-ship because you really do not need a University degree to become one.  One study found that only 14 percent of our entrepreneurs have University degrees, and 17 percent have only elementary degree, and 4 percent have no formal education. This means anybody could be entrepreneurs.  If Indonesia can build a pool of some 3 million entrepreneurs in the next decade, and each entre-preneur hires an average of 25 workers, that will amount to some 75 million jobs, an enormous life-changer for our citizens and for our national economy he stated.

All of this is part of what we in Indonesia call a 4 – track strategy of “pro-growth, pro-poor, pro-jobs, pro-environment”.  The overall purpose is to attain “sustainable growth with equity.  By pursuing this strategy over the past ten years, we have been able to stimulate growth, reduce inequity, and alleviate people from poverty. The implementation of this strategy has helped create jobs, generate more economic opportunities and protect the environment he stated

With this President Yudhoyono invited captains of industries to be Indonesias partner, especially through Masterplan that will intensify infrastructure construction in six economic corridors and have disbursed over $73 billion since 2011. Between 2015 to 2017there will be  25 strategic projects(railroads, electricity, ports, telecomunications, and highways) worth $26 billion.   But President SBY reminded that growth alone is a panacea to development.

Here, I must add that economic growth and progress are not necessarily the same thing.   This is why pro-poor programs have always been at the heart of Indonesia’s economic transformation, whether in the form of free health care for the poor, special funding for schools, rice package for the poor, cash transfers, and others

As a final pointand although I will no longer be at the helms of my country in mid OctoberI wish to assure you that Indonesias future will remain replete with abundant opportunities. And I am confident that you wouldnt want to miss this momentum.  I thank you President SBY ended.  The participants clapped loud and Mr Klaus Schwab stood up to extend his appreciation for the Presidents speech.