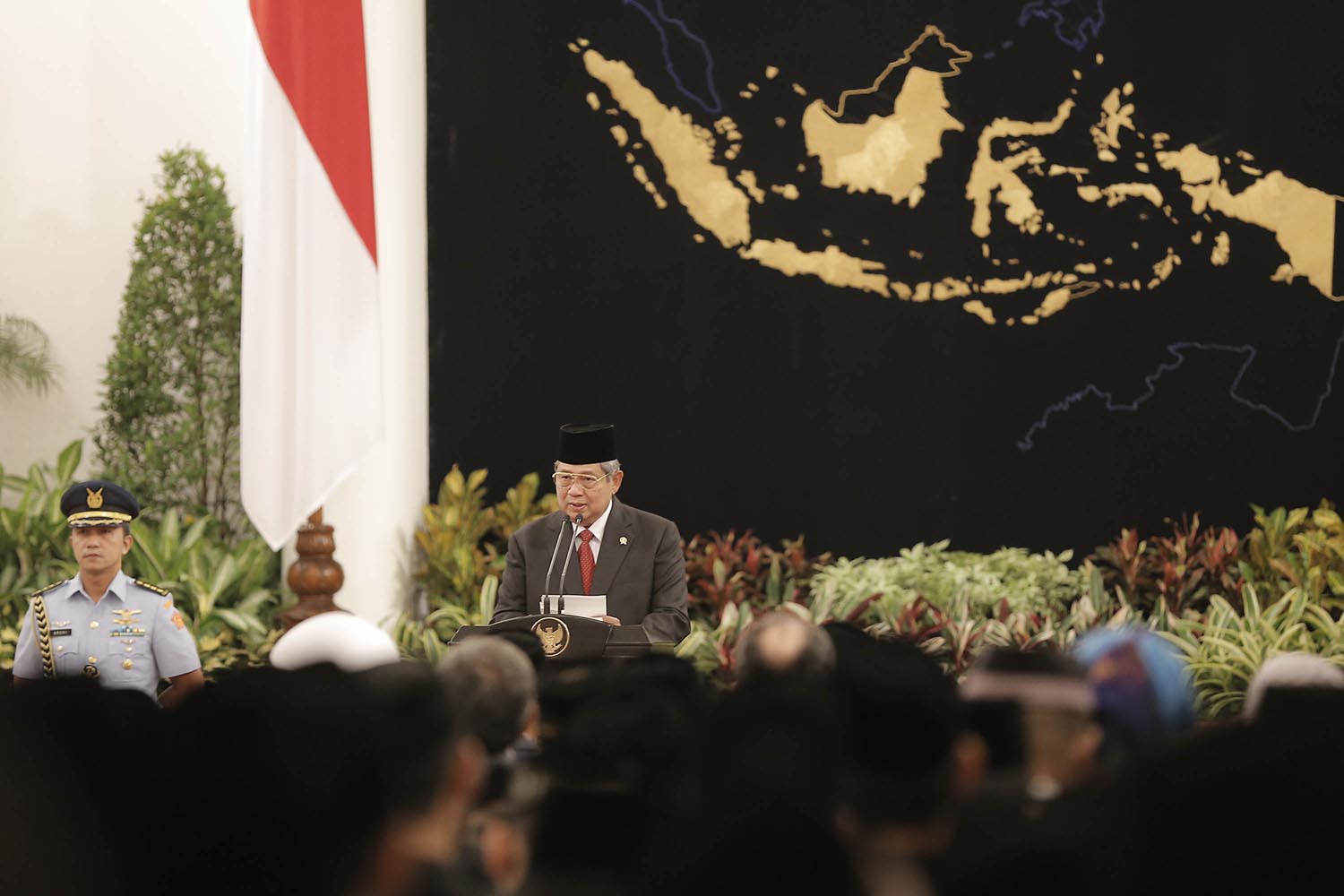 On Wednesday evening, President Susilo Bambang Yudhoyono received the phone call of United Nations Secretary General Ban Kin Mun, who was calling from Haiti, to discuss the situation in the Gaza Strip. Both Indonesia and the UN agreed that a cease-fire was critical and that humanitarian assistance must be provided. Before concluding, UNSG Ban looked forward to participating in the UN Alliance of Civilization Conference.

President Yudhoyono continued the night by hosting the national commemoration of Nuzul Quran at the State Palace.

Attended by foreign Ambassadors and representatives from Muslim communities, President Yudhoyono divided his speech into three points, namely on the virtues of Nuzul Quran, a call to return to brotherhood and solidarity after the heated Presidential Elections and a special segment for Indonesia’s views on the developments in Gaza Strip Palestine.

Below are excerpts from the Presidents speech.

“Honoured Guests, Ladies and Gentlemen.  During the celebration of Nuzulul Quran and in the middle of holy Ramadan, our Palestinian brothers and sisters are unfortunately having to cope with such a frightening ordeal. In the second week of Ramadan, on July 8 2014, Israel began its military action in Gaza Strip which has so far claimed more than 200 Palestinian lives.  As a strong independent nation with the largest Muslim population in the World, we cannot afford to let the suffering of our fellow brothers and sisters in Palestine to continue”

“Ladies and Gentlemen, It has been for decades that peace in Palestine has become one of Indonesias main foreign policy objectives. We have consistently voiced our support for Palestine. Our country, which has long supported the idea of Palestinian independence, strongly condemns Israeli that has unnecessarily-and unproportionately-taken military action in Gaza. Not only does this military action violate human rights,it is also in contravention with the international law. In this matter, Indonesias position regarding the current situation in Gaza Strip could not be any more clear”

“As I have mentioned in recent occasions, Indonesia underlines four objectives for peace and security in the Gaza Strip;

First, Israeli military action must come to an end;

Second, a ceasefire agreement must be struck under the supervision of the United Nations;

Third, the cycle of violence in the area must be prevented; and

Fourth, the humanitarian aid targeted at the victims of Israeli military action must be urgently provided.

If these four targets could be achieved, Indonesia wishes to see peaceful negotiations resumed to make Palestine an independent state”

“Ladies and Gentlemen, I have informed the Iranian President Hassan Rouhani in his capacity as Chairman of the Non-Aligned Movement in a phone call in July 11 2014 about these four objectives important for Indonesia which I described to you earlier. Alhamdulillah, President Rouhani strongly agrees with Indonesia’s position in order to achieve peace and security in Gaza Strip”

“Moreover, we have also taken diplomatic steps through several forums such as the OIC and the UN. At United Nations, our country was able to draw support from several countries so that a UN Security Council meeting could be held in July 12, 2014 as a result. The UN Security Council meeting has produced a statement which urges both sides to reach a ceasefire agreement.

Yesterday afternoon, I heard the news from various international media about our close friend Egypt having proposed a ceasefire agreement between Israel and Hamas. Let us all pray that hopefully both sides can accept the proposed ceasefire agreement in order to end the cycle of violence in Gaza Strip”

“I have also just spoken to the United Nations Secretary-General Ban Ki-moon. Meanwhile, Minister of Foreign Affairs Marty Natalegawa is currently arranging and looking for a possible moment at which I can speak to US President Barack Obama. I would very much want world leaders to have the same courage and commitment to end the violence in Palestine, so that hopefully, peaceful talks on the issue of Palestinian independence can be continued” President Yudhoyono stated.